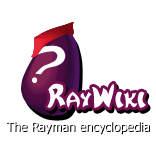 RayWiki is a collaborative Rayman encyclopedia based on the MediaWiki software. It was founded on January 4, 2008 by Hunchman801, and it is one of the most important Pirate-Community websites, along with RayTunes. It is widely considered as the most complete source for Rayman knowledge. 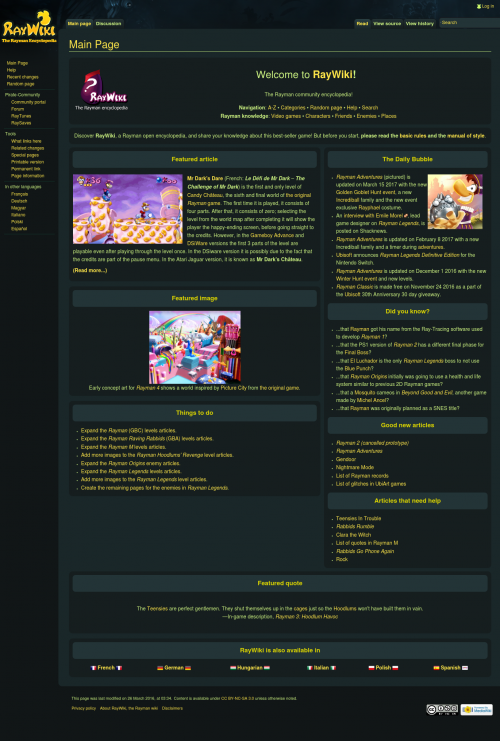 The idea for RayWiki was initially posited in December 2007 by administrator Hunchman801 as a replacement to his RaymanEncyclo facility.[1] The idea was met with encouragement, leading to a beta version of the wiki opening in January 2008, under the name WikiRayman, with individual English and French wikis. Content from the old RaymanEncyclo was brought in to the new wiki, in addition to new content written by Pirate-Community users, who were now able to contribute to a Rayman encyclopedic resource.

In February 2008, the name of the wiki was changed to RayWiki, after a vote was made in favour of the new title.[2][3] The wiki continued to function as a beta until October 2008, where it was announced it was moving out of beta and into final release.[4][5]

On August 13, 2014, the 2009-founded Rayman wiki in Polish language hosted on the Wikia platform was transferred to Pirate-Community and became the Polish version of RayWiki.

On October 30, 2016, the wiki was updated along with the rest of Pirate-Community, and its appearance aligned with that of the forum.

As of August 2020, RayWiki contains more than 5,700 articles in eight languages. The French version is the most complete, with over 780,000 words, while the English version has the most articles with over 1,700.