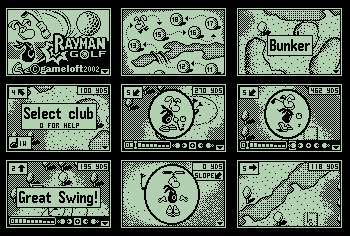 A selection of screenshots from the monochrome version

Rayman Golf is a spin-off game playable only on mobile phones. It is available in a primitive monochrome version and a more advanced, full-colour version. Both were developed and published by Gameloft S.A., and both were released in 2002.[1] The game is a golf simulator based on the Rayman series and using its characters.