This page is dedicated to any technical information for any of the Rayman games. Currently only the PC games are listed. User contributions with more information of more games, including for other consoles and platforms, are greatly appreciated.

Note: Remember to always keep a copy of the original files when replacing any in case they don't work.

Rayman on PC was created for MS-DOS and requires an emulator, such as DOSBox, to run on modern operating systems.

Rayman Designer, also known as Rayman Gold, is featured in several packs such as Rayman Forever and Rayman Collector. While the game itself runs on MS-DOS like the original game, the actual Mapper program is a Windows executable. 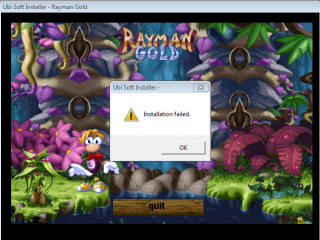 The installer reporting that the installation failed.

On some copies of the game, most notably Rayman Gold, the installer may report that the installation failed. Despite this, sometimes it will actually succeed. To keep the installed files the user will need to close the installer using the task manager, otherwise the installer will automatically remove them. If files are missing they can be copied over from the disc.

Sometimes the Mapper program won't import maps if they are from another directory. This can easily be fixed by placing the map file in the RayKit directory or any of its sub-directories and importing from there.

Many anti-malware programs have reported trojans in the RayKit directory, most notably in the Mapper file, in Rayman Forever. According to user RibShark on the GOG forums,[1] there is in fact code for the CIH virus, although the exe has most likely been configured to not allow it to run. The virus should also not effect Windows systems running XP and above. For anyone who feels insecure, the files can easily be replaced by the ones from any other version of Rayman Designer. 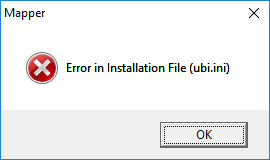 Rayman 2 can be made to run on Mac by following this tutorial: Rayman 2 on Mac.

Note: When copying saves from one PC to another it is recommended to copy the configuration file as well due to it containing the save slot names. The names can otherwise be adjusted manually in the game afterwards.

The installer for the game won't run on any 64-bit computers below Windows 8. To play the game the user will have to manually copy over the files from the disc to their computer. Note: The game won't show up under installed programs by doing this, making it impossible to uninstall normally. To remove the game, the files will have to be removed manually.

This issue was fixed in the GOG version with no known solution being available for the original release.

The game resolution can be changed by manually editing the ubi.ini file or running the configuration program. Setting the aspect ratio to anything other than 4:3 will automatically stretch the game or have it crash on launch. To prevent it from doing this there's a patch which allows true widescreen on all game assets except the HUD and loading screens.

For some users the option to run the game with DirectX doesn't appear on Windows 10. To fix this, the ubi.ini file will manually have to be edited with this:

If the game is running using nGlide the speed can be changed by changing the refresh rate. Usually setting it to 120 Hz will fix any speedups.

While Rayman M and Arena share many similarities, their file structure differs. Save files won't work between the two games and the configuration programs have different settings.

The game resolution can be changed by manually editing the ubi.ini file or running the configuration program. Setting the aspect ratio to anything other than 4:3 will mess up the menus. To prevent it from doing this there's a patch allowing for true widescreen.

On Windows 8 and above DirectPlay will have to be enabled for the game to launch. On Windows 10 the option is by default turned off. To turn it back on, the user will have to go to the control panel and turn it on under legacy in the option to turn Windows features on or off.

The game resolution can be changed by manually editing the ubi.ini file or running the configuration program. Setting the aspect ratio to anything other than 4:3 will mess up the menus. The Better Rayman 3 patch fixes this issue by allowing true widescreen.

In the ubi.ini file, by changing the number before the resolution from 1 to 0 the game will run in windowed mode.

Rayman Raving Rabbids has an option in the settings for widescreen, although it stretches the game like in Rayman 2.

This is a known error with no current solution. It is not completely clear which game versions/systems are affected. There is evidence that the GOG version 2.0.0.4 runs fine without this error on 64-bit Windows.[2]

If the background appears black, with the text still showing, it is due to the contrast and brightness values being corrupted. A simple fix for this is to simply navigate to the in-game options and turn up the brightness and contrast. If this does not work, the registry keys should manually be deleted. Do so by going to the registry editor (regedit) and find:

Then remove the brightness and contrast keys, or attempt to change their values. This process may have to be redone if the game changes it back.

Go to the registry editor (regedit) and find:

From there the user will need to change WindowedMode to 1 instead of the default 0.

By default the game will run in 4:3. Switching to 16:9 will result in a stretched 4:3 aspect ratio. It is possible playing in true 16:9 where the bottom and top are cropped away by changing the ScreenMode value to 0 in the registry settings. Doing so will mess up the placement of the HUD in several areas of the game.

The GOG version includes a small GUI utility (language_setup.exe) to change the language. All it does is modify the registry key above. The settings are specified in language_setup.ini. The parameter name is Language of type DWORD, with the following values: 0-English, 1-French, 2-Japanese, 3-German, 4-Spanish, 5-Italian, 8-Portuguese, 10-Polish, 11-Russian, 12-Dutch, 13-Czech, 14-Hungarian.

Changing the language by modifying the parameter manually in the registry works in the retail version of the game as well, with the exception of Russian, Czech and Hungarian, which will show only blank text boxes. Conversely, the country-specific retail versions of the game may fail to show text in any language other than the native for that release. Since the data files are identical, the difference must be in the main program code (Rayman Origins.exe). The GOG version is the only one known so far to support all languages in the same installation.

The button mapping has to be manually changed when plugging in a controller.

Replace existing videos with the ones from the PlayStation 3 version for higher quality and framerate.