Avelina is a playable characters in the Wii U and Nintendo Switch version of Rayman Legends, Rayman Adventures and in Rayman Mini.

Avelina shares the same look as Barbara, however, she wears a suit similar to that of Aveline de Grandpré in Assassin's Creed III: Liberation.

This young princess is training hard to become a great Assassin. Her biggest problem is that there aren’t many rooftops to climb on in the Glade of Dreams...
—In-game description, Rayman Legends, Rayman Adventures

In Rayman Legends she could only be unlocked using a special code given to players who preordered the Wii U version from GameStop in the US or Game in the UK. In the Nintendo Switch version she is unlocked by default.

In Rayman Adventures she can only be unlocked by purchasing the Assassin Pack or Ubisoft Megapack which can only be bought with real world currency. 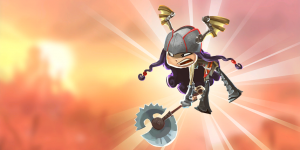 In Rayman Mini she is unlocked for 2 Swag Coins.