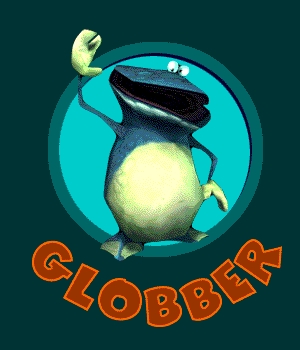 The title screen of the Globber minigame

Globber is a baby Globox, and one of the many sons of Globox and Uglette. Globber is not certain to have appeared in any Rayman game; he is mentioned in the Rayman Zone magazine. It states that ‘Globber’ was originally Globox's name, and that Globox passed the name onto his son before renaming himself ‘Globox’. It is possible that Globber is one of the many male baby Globoxes seen in Rayman 2, though this is not necessarily the case. Globox's choosing of Globber to bear his name suggests that Globber may be special amongst his siblings in some way.

A Flash game titled ‘Globber’ was playable on an official Rayman 2 website, but can no longer be accessed. The name of the minigame is a pun on that of the popular game Frogger, which has similar game mechanics. In Globber, the player controls Globox – presumably before he adopted a new name and gave his old one to his son. Globox must cross a road while avoiding cars, then cross a river by jumping across logs, making sure not to fall in. He can go forwards and backwards, but not left or right. Crossing the road and river once earns the player 10 points; the game's difficulty increases as more points are earned. Globox has three lives; when all three are lost, the game is over.