This article is about the magazine. For the website, see RaymanZone. 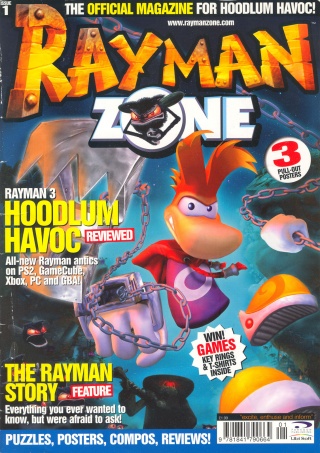 Rayman Zone was an official magazine that was published and sold only in the United Kingdom by Paragon Publishing Ltd in 2003. Copies of a slightly different edition were given to winners and runners-ups that participated in the Rayman 3: Hoodlum Havoc Hall of Fame competition held by the official Ubisoft website of the same name in the same year, and was later distributed in select games stores and bookstores. Those that were sold in store carried a Rayman gym bag as a free gift. Although it claimed to be a first issue, no further issues have been published since.

Most of the magazine's contents were centred around Rayman 3: Hoodlum Havoc as it was released at the time. It included detailed reviews and console comparisons of many versions of the game alone, as well as an interview with Ahmed Boukhelifa in regards to it. Along with these was a six-page article about the history of the Rayman series, and a five-page feature giving shorter reviews for the other games in the series prior to Rayman 3. As it was aimed mostly towards children unlike most other games magazines, it contained puzzles and pull out posters, and some of the content was written as if it was spoken by Rayman himself. The magazine had over 50 pages, and its contents were: