Malicious and fanciful, these Little Globox spend their time playing in the forest, more often than not at the expense of the inhabitants of the Glade. Their last whim: to play at « piggy in the middle », using Murfy as the ball...
—Character description, Rayman 2's official flash website

A Baby Globox is one of Globox and Uglette's more than 650 children. Along with their parents, baby Globoxes first appear in Rayman 2 and its remakes, where it appears that a large number of them are prisoners held on the Buccaneer. Those who had not been captured appear either individually or in groups, and are usually seen cheering Rayman on or crying for their missing father. Baby Globoxes reappeared in Rayman Raving Rabbids with a significant change in their appearance.

In the original Rayman 2, the baby Globoxes first appear in the Woods of Light, where they ask Rayman where their father is and cry when told that he is missing. They then inform Rayman that Ly the fairy has been captured, setting the course for the hero's next mission.

Two appear in the Fairy Glade, the following level, cheering him on. Their next major appearance is in the Iron Mountains where Rayman has to rescue them from the mines. Several are later freed from the Prison Ship and three attends Rayman's funeral during the ending, running towards him when he arrives. Aside from this, they appear in several bonus levels.

Their roles increased in Rayman Revolution as several can be met in the hub levels, and one is required in order to reach Whale Bay.

In Rayman 2 Forever they appear only in bonus levels where Rayman has to collect them, similarly to tings in other games. 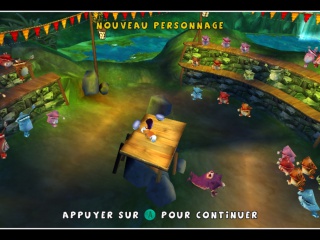 Baby Globoxes around a podium.

In Rayman Arena, baby Globoxes are present in race levels, on the sides of the track and around the podium, encouraging participants. 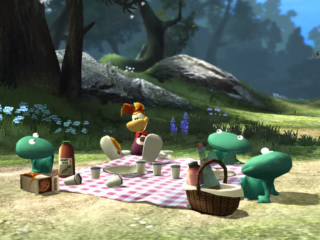 Baby Globoxes as they appear in Rayman Raving Rabbids

In Rayman Raving Rabbids, Rayman is having a picnic with several babies when the Rabbids attack and capture them. The babies are used by the Rabbids in several mini-games. When Rayman finally escapes, he has a revelation that he was being forced to show the Rabbids how to do things, which they would ultimately try to use on the baby Globoxes. Rayman desperately tries to go back for the babies but becomes stuck in a hole. The fate of the babies is unknown.

Most of the baby Globoxes are the same color as their father Globox, an indication that a large number of them are male, though there are a few of them that are found in colors other than blue-green. These particular Globoxes can be found in the Globox Village and Globox's House, and are playable characters in the bonus mini-games involving baby Globoxes. Female Globoxes are generally as a rule some shade of red, usually pink. 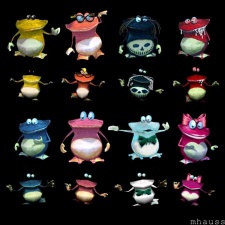 A group of baby Globoxes

In the Baby Football multiplayer minigame (which is exclusive to Rayman Revolution), if the player inputs a code (tapping L2, R2, L2, R2, L2, R2, all while holding L1 and R1), names appear over the heads of each of the baby Globoxes. The names which appear over the male blue babies are Reno, Arno, Poc and Druid; and the names which appear over the heads of the pink female babies are Coach, Iki, Lolo and Mike. Hardrox, who is the referee of the baby Globoxes' football match, has the name "Steve" appear over his head. All of these names are either first names or nicknames of developers who worked on the game, and all can be seen during the game's credits. 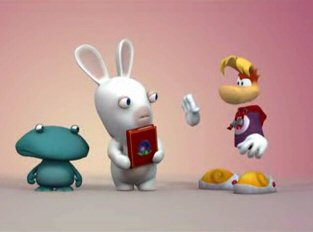 A baby Globox feeling unfairly treated in one of the UNICEF commercials.

At the time Rayman Raving Rabbids had been released, the baby Globoxes had been redesigned, and appear in a number of French adverts for UNICEF in which a Rabbid would treat one unfairly, for example, it would eat a lot of food but not give the baby Globox any, until Rayman would come along and pull down a blind which had messages in French saying "I have the right to eat!". Three of these adverts were made and they were to raise awareness of the rights of children in a humorous manner, particularly those in third world countries. The messages were: