Glombie is a character who appears in Rayman Adventures and Rayman Mini. He is a member of Globox's species who is dressed as a zombie.

While Glombie is a play on the word "zombie", he actually resembles the Frankenstein Monster. His body is grotesquely green and is covered with stitches. He has two bolts attached to his neck. His lips are a dark, faded shade of pink and are very dry. His teeth are in very poor condition. His eyes are immensely yellow with red pupils.

Halloween is here again, and no one like a good scare more than Glombie. He's been working hard at his costume, and it's finally ready for a night out trick or treating!
—In-game description, Rayman Adventures

He could be purchased for 3 000 Pumpkins during the Halloween event. He can now be unlocked by purchasing the Ambitious Adventurer Pack. 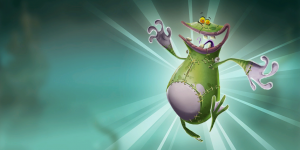 In Rayman Mini he is unlocked for 28 Swag Coins.