From RayWiki, the Rayman wiki
(Redirected from Ray-one)
Jump to navigation Jump to search

Ray-One is a character who appears in Rayman Adventures. He is a member of Rayman's species, who was introduced during The Galacto-Wheel Challenge.

Ray-One is a member of Rayman's species, who is an intergalactic explorer. He wears a futuristic silver space suit, which includes a space helmet with a visor and two bolts on top. He has armor on his torso, which has a blue glowing emblem (that resembles Rayman's symbol). He also wears gloves and shoes that have yellow glowing stripes on them.

Ray-One is an intergalactic explorer who loves adventuring across the universe! When Ray-One is too tired to explore a new galaxy, he activates his visor goggles and goes on a virtual spaceflight!
—In-game description, Rayman Adventures

He can be obtained for 2,500 Kryptoriums during the The Galacto-Wheel Challenge. 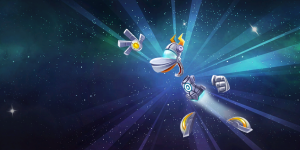