Rayphael is a character who appears in Rayman Adventures and Rayman Mini. As stated in his description, Rayphael is a painter and is an avid goer for Renaissance Events.

Raypahel looks similar to Rayman, but with major differences in clothing and appearance. He has dark red hair and a has a lighter skin tone. His outfit is based off nobelman's clothing from the Renaissance era. He wears a purple beret with a white feather on the side and a gold brim around it. He also wears a purple buttoned doublet with a white ruff, a white belt, and a golden ring on the right side of his doublet. On bottom of his doublet, below his belt, he wears purple puffy breeches that have yellow lines, and he wears brown leather shoes with a golden trim near the bottom.

Rayphael is very excited about the Renaissaince Fair! He's been hard at work with his brushes and cannot wait to show everyone his amazing paintings!
—In-game description, Rayman Adventures

He is an event exclusive costume for the Renaissance Event. He can be bought for 2 500 Golden Goblets. 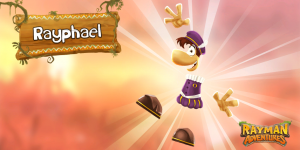 In Rayman Mini he is unlocked for 4 electoons.