Robots are humanoid machines created to guard the Moody Clouds in Rayman Origins. They use their long outreach electric shocks to attack. Although players can extract a lum from their bodies with one hit, robots are almost invincible. A way to kill them is to push them into an environment trap, such as a circular saw; the other way to kill them is to use a Blue Punch against them. Doing this will add 3 more lums to the player's counter, though pushing a robot into a cliff doesn't count as a kill. Robots have big eyes, big-lipped mouths, an antenna over their heads, a thin body divided in two parts, claws for hands and skates for feet, which are able to attach to the walls. Robots apparently love skating, as some of them can be seen rolling around happily while not having visual contact with the players.

During development, there was going to be a Robot Teensy skin. This was scrapped later. It is unknown if the skin would have been modeled after the Robot. 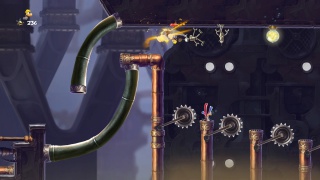