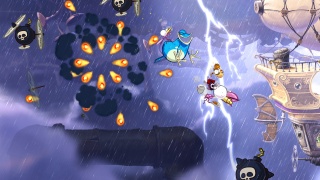 Rayman and Globox riding mosquitoes, as seen from an early trailer.

The Moody Clouds is the sixth world in Rayman Origins and is located above the Mystical Pique on the world map, although it is strongly distinct in its design. Most levels in this world are, unlike past worlds, played continuously after each other meaning that the player isn't taken to the world map in between the levels. The player can still exit the level and restart at the level that was exited from.

This world has a mechanical setting with Rayman and the team of heroes infiltrating a big factory high up in the sky. Parts of the world contain dangerous stormy clouds, which can strike the heroes with lighting. Most enemies in this world like the Robots are mechanical and can't be defeated with normal attacks. There are also moving blades, big and small mecha flies and electrical shocks.

After saving the Four Kings, the heroes return to the nymphs and Teensies in the Dreamer's Door to now be able to transport to the Moody Clouds. After advancing past the stormy clouds with the help of the mosquitoes, the heroes end up at a strange looking factory up in the clouds. Later on, they meet up with the Magician, who reveals himself as both the mastermind behind the machinery and an admirer of Mr Dark. The heroes must chase him through the machinery and clouds, with the help of the mosquitoes once again.

In Rayman Legends, the levels from Moody Clouds are present in the Mystical Pique painting in the Back to Origins mode.