Samuray is a character who appears in Rayman Adventures. He is a member of Rayman's species. Samuray was introduced along with Sakura during the Golden Marathon event. Samuray is a samurai warrior who comes from the Wild, Wild East.

Samuray is a member of Rayman's species who is a samurai. His armor and helmet is purple, with golden lining all around it. He has a silver robe over his body armor, and a red rope belt tied around his waist. He wears socks and sandals with red straps.

Samuray from the Wild, Wild East is one of the bravest warriors you've never met! One of the fastest in the Golden Kingdom, Samuray loves to run long distances with his helmet perched perfectly in front of his eyes!
—In-game description, Rayman Adventures

He can be purchased through the Golden Marathon's Mega Marathon Bundle. 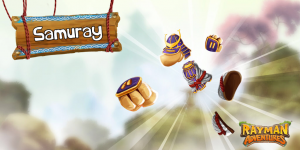