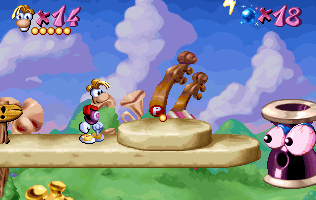 Simple Powers, also known as Powers 1, are power-ups in the original Rayman game, Rayman Junior and Rayman Designer, looking like small red bouncing balls with a white letter P on them, around which a health point gravitates. They restore Rayman's health by one point.