Swifterella is a character who appears in Rayman Adventures and Rayman Mini. She was introduced alongside Raybolt in the Summer Marathon Event.

Swifterella is an athlete who has incredible speed. Swifterella wears a black cap with a triangle logo. Her wings are water bottles attached to her cap. She has short pink hair and has tanned skinned. Swifterella wears two white & green arm sweatbands. She wears a green boob tube and green & white skirt. She also wears black shorts underneath her skirt. She wears pink socks and brown running shoes. Her weapon of choice is a golden trophy.

She may not be able to jump the tallest buildings, but she's definitely faster than a speeding train! Is it a bird? is it a plane? NO! It's Swifterella!
—In-game description, Rayman Adventures

She could be purchased in the Mega Marathon Bundle during the Summer Marathon event. 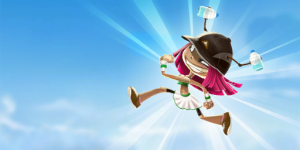 In Rayman Mini she is unlocked for 5 Swag Coins.