My name is Aaron. I'm Hungarian and a passionate fan of the Rayman series. The only Rayman game I don't like is... you guessed it. Raving Rabbids. The game I'm playing with the most currently is Rayman Revolution for the PS2. I just love it! The graphics are absolutely gorgeous, the soundtrack is great and the overall gameplay is awesome. I mainly love it because it includes much more exploration than TGE, and the exclusive challenges and minigames (such as BBFoot (also known as Baby Football) and Waterski Challenge).

I love playing racing games and platformers, but mostly the Rayman games. I'm interested in drawing, dance (more specifically modern dance), the Rayman series, and Psychology. I often edit this encyclopedia, though I sometimes edit Wikipedia too. My personal all-time favorite racer is Burnout 3: Takedown. It's just amazing in my opinion, it's very fun and action-packed.

My first experience with Rayman

How I got to know Rayman was in 2014 when I played the PS1 version of Rayman 2. I was 10 years old at that time and I was really scared of the spiders in it (and I'm still a bit scared of them now though not as much). I remember that at that time, I couldn't beat the game because while I have beaten every other level, the last one was too difficult for me as it was the level that had the final boss in it, Razorbeard. And Razorbeard was just way too difficult to beat but I was determined so I kept trying over and over again until I eventually gave up and asked my brother if he could help me with Stage 2 of the boss. As I said, I completed most of the game myself, only for that last bit my brother helped me. And that's how I beat the game. Stage 2 is still kinda difficult for me. 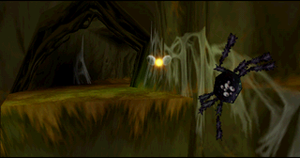 The spiders were horrible for my 10-year old self.

My stories with the Rayman games

How I got to know about this game is actually pretty interesting. I was just looking for something (can't remember what) in the chest where I stored my PS1 games when I accidentally came across an original black-label copy of the PS1 version. This was very surprising to me because I never knew we had it.

As for how I got to play Rayman 2 on PC, it's nothing special really. I just asked my dad if he would buy the GOG version for me and he accepted so he bought it for me and that's how I got into it. The PC version is the second best in my opinion, but it's really good anyway and I adore it.

At first, the only reason I wanted a PlayStation 2 was to play this game and when I got to experience it, I wasn't disappointed. I know it has a lot of glitches and the framerate isn't so good, but I love it either way.

This was the second game I played on PS2. I've recently started replaying it on PC as well, and I actually find that version a bit better than the PS2 version. While it's true that the PS2 version has 8 directions because of analog control and the PC version only has 4 because it uses the arrows instead, I find getting good scores on PC a lot easier than on PS2.

While I know Origins was made before Legends, I only switched them because the story for those games would only make sense and be in order if I switched them.

One time when a few others and I had dance class, before class, my dance teacher knew that I was a passionate fan of Rayman so he offered me a copy of this game with the box and everything. And obviously, I couldn't say no because as I said, I'm a passionate fan of Rayman and that's how I got to play it. When we got home I was hella excited to play it. I love it, though my only mild complaint with the game is that when I played it, I found it too short.

Since my dance teacher gave me Legends before, I decided I should ask if he has Origins as well because I really wanted to give it a go and play it. He said he has it but it's on a pendrive. I chose to accept it anyway since like I said, I wanted to play it since I watched videos of it and from those videos, it looked like it would be a great and fun game to play. I've completed the main game with all four Kings and I was not let down. 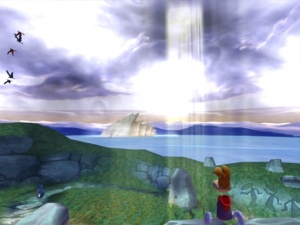 A picture of my favorite level in Rayman 3.

Personally my all-time favorite Rayman game is Rayman 2. Rayman 2 will always be the best game in the series in my opinion. I just love the dark and scary, but straightforward story and the magical atmosphere, that godly overworld theme, the likeable, funny characters, and while the game is linear and all that, the gameplay is intense (especially in the Cave of Bad Dreams' sliding segment and where the spider is chasing you in The Canopy). Overall, I just love it. I also love it partially because of the memories I've had with the game. My two other favorites are tied for second: Rayman 3 and Rayman Origins. Both are amazing too like Rayman 2 in my opinion. 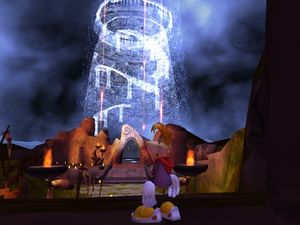 Another image of my favorite thing in that level, which happens to be this beautiful tower.

Rayman games I own

I used to own a PS1 Slim but I figured I don't need it because the other console I own is a PS2 and those are backward compatible with PS1 games. I still have the official red PlayStation memory card that I always used to have with it (in case I still want to play my PS1 games in the future of course). Also, because my PS1 memory card is red, I thought it would be fitting to own an official red memory card for my PlayStation 2 as well. So I now own that as well. Anyway, back to consoles, the other console I happen to own is an original PS2 Fat. While I'm clearly unable to show any pictures of my PS1 Slim, here are some pictures of my PS2 Fat (please excuse the bad quality as I took these images with my tablet's camera):

My PS2 from bird's-eye view.

My PS2 from frontal view.
Retrieved from "https://raymanpc.com/wiki/script-en/index.php?title=User:Aaron&oldid=81947"
Category: