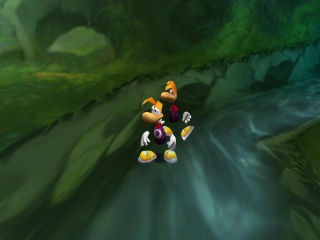 The outcome of the glitch.

To activate this glitch, the player must get a Try Again in the Woods of Light, by jumping into the pit at the end of the level, where the Spiral Door will appear once the Teensies nearby are freed. Once the level restarts, another Rayman will be seen walking out of the passageway which leads to the next section of the level. This Rayman cannot be interacted with, nor does it cause any other effects.

This glitch causes the "beam" connecting Rayman to a flying ring to not appear, the circumstances causing such a glitch are unknown. 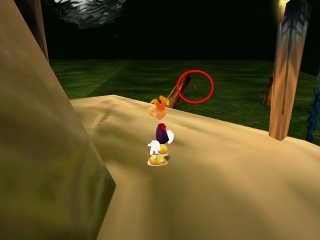 The miniature Jano that appears in the Marshes of Awakening.

A glitch involves Jano has been known to occur in the PC, N64 and Dreamcast versions of Rayman 2. If the player returns to the Marshes of Awakening after beating the Cave of Bad Dreams, they can see a minuscule Jano floating over the swamp water, just on the left side of the log leading to the cave, where Rayman appears after choosing this level.

Although rare and not confirmed how to achieve, it is possible to be able to play as Rayman in several of the cutscenes. By pressing the jump button, there have been instances in both the Dremacast and Nintendo 3DS versions where this has accursed.

In the GoG (Windows) version a glitch was observed that causes all surfaces in the game to be rendered bare, with no textures. It can occur after switching to a different application, then back to the game, but the exact conditions are unknown. The glitch persists across levels and cutscenes, until the game is restarted.

After Murfy talks to Rayman, he flies off camera to despawn. In some cases he will fly off to the left or right, and pressing and holding "R1" or "L1" at the right time to spin the camera in the direction he is turning will make him constantly spin in circles around Rayman, trying to race the camera. The player can do this forever as the camera turns at the same speed as Murfy moves, though once the player stops turning, Murphy will be able to leave the camera's view and despawn. This glitch also works in Rayman Revolution.

If you turn up or turn down the sound effects volume in the options menu, you hear different sounds. One of them is a walking shell sound. If you hear it while turning up the volume, try holding the 'right' button, and exit the pause menu. The sound will continue.

Helicoptering Off the Front

It often happens when you run through the door that leads to where you meet Clark, in the Menhir Hills. In View mode, you can fly around the level, and you can even leave it, and fly out to "Orange World". This also allows Rayman to run around in the walking shell tracks. It is still unknown as to how exactly it is performed.

This is notably easier to perform than some others:

Perform the air swimming glitch and fly/swim to the entrance of the Sanctuary of Stone and Fire. Fly as high as you can, or Rayman will just enter the level normally. After a long time, Rayman will start leaving the screen, but he will come back later, and start flying through the rock.

Sometimes, the sound when flying with the helicopter can continue playing, similar to the Shell Sound glitch. This can happen when the user plays for a long time without turning off the console (but saving at all opportunities).

Though there are flying shells in the game, in The Sanctuary of Stone and Fire, when the player rides the walking shell, they can fall off the edge at the beginning and because the shell is not programmed with proper gravity (the shell veers down in relation to itself constantly if not touching the ground as opposed to falling downward in relation to the world), it is possible to make the shell fly in loops and run around the wall of the hole until a wall is hit and the shell explodes.

There have been reports of the Mini Janos wearing hats like Jano in the Cave of Bad Dreams. It is not yet confirmed how this glitch is triggered.