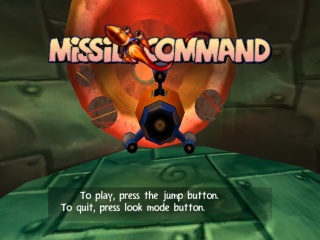 The title screen of Missile Command.

The missile is in love with its target, but it can't find it any more. Can you help?
—In-game description, Rayman 3

Missile Command is the sixth of the nine minigames which can be unlocked and played in every version of Rayman 3. It is unlocked by earning 100,000 points.

This minigame takes place in an artificial tunnel, probably in the Hoodlum Headquarters. The main goal is to guide the Shock Rocket combat fatigue's missile, controlled by the player, and survive until the end of the path. The tunnels contain obstacles like fans with gaps, intact fans, spinning areas and curved tunnels that the player must avoid in order to reach the end of the tunnels which displays a target with André's portrait. The red bar represents the missile's health. If the missile gets destroyed by hitting anything, the player loses the minigame immediately. The yellow bar represents the remaining distance to reach the target, that slowly gets reduced as long as the player survives in the tunnels. The player wins when the yellow bar is completely empty and the missile hits the André target.