A depraved and hysterical baddie, André spends most of the game enclosed in Globox’s belly because the latter swallowed him. André has such a horribly warped mind that he obliges Globox to drink plum juice, making our poor friend lose all semblance of self-control …
—Manual, Rayman 3

André, also known as the Dark Lum Lord, is the main antagonist of Rayman 3. He is the original Black Lum, the result of a Red Lum being frightened. He has the ability to corrupt other Red Lums into Black Lums by touching them; this is how he raised an army of Black Lums, which then became the game's titular Hoodlums. He spends the first half of the game inside Globox's stomach after the latter accidentally swallowed him in the Fairy Council. Later, he joins forces with Reflux, fallen champion of the Knaaren, and together they gain the power of the Leptys in the hopes of destroying Rayman and wreaking havoc throughout the Glade of Dreams.

As a Black Lum, André is essentially a small ball of black fluff. He has large, bulging, bloodshot eyes and a long tongue that tends to stick out at times. From his head protrude small, triangular ears that stick upwards slightly, and fly-like wings. Unlike other Black Lums, he has arms, and the palms of his hands are hairless.

André is rude and mean, often making cruel remarks about Rayman and Globox throughout the games. He enjoys causing chaos and destruction and dreams of taking over the Glade of Dreams. He is insane and manic, and is revealed as a coward at the end of Rayman 3, when Rayman is about to convert him back into a Red Lum.

In the beginning, there was one. No creature knows the true origin of the Dark Lum Lord, who began the reign of havoc on Rayman's world. It has been whispered that one day, a single red lum beheld something so terrible it grew black with fear and evil. This transformed Dark Lum spread the evil to other red lums, eventually forming an army of cloaked soldiers called Hoodlums. Soon Rayman and Globox discovered the Hoodlums' plan: to taint the Heart of the World.
—Official description, Rayman 3 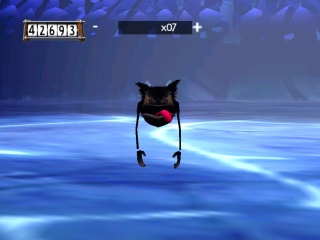 André at the end of the game.

André was originally just a normal Red Lum living in the Fairy Council. However, one peaceful night, when Rayman and Globox were sleeping, the dreaming Rayman's hands detached themselves from Rayman and wandered off, performing various shadow puppets to a Red Lum, growing from simple, relaxing ones to evil, scary ones. The Red Lum was frightened so much that it transformed into André, a Black Lum that desired world domination.

After being frightened by the shadow of the hands of Rayman, this Red Lum becomes André the Black Lum.

André started by transforming most of the Red Lums into Black Lums like himself. However, the Black Lums he created were not as powerful as him; they could not talk, were less intelligent, could not corrupt other Red Lums and did not have arms. The Black Lums began stealing fur from animals like Bontons and used it to weave potato-sack costumes for themselves, becoming the Hoodlum army. André became the first Hoodlum, a Hoodmonger.

After becoming a Hoodlum, André pursued a frightened Murfy throughout the Council. Murfy found Rayman and Globox sleeping at a tree, and tried to wake them up as André came closer and closer. Globox's attempts to snatch up the sleeping Rayman and bring him to safety resulted in him running away in fear with Rayman's hands. Murfy grabbed Rayman by the hair and flew away with him. 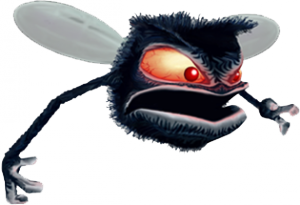 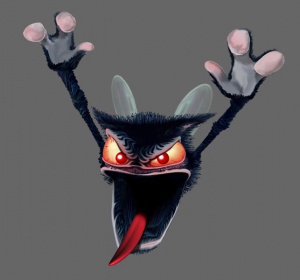 While travelling through the Fairy Council, Rayman and Murfy soon found André again, and Murfy distracted him while Rayman beat him up. With his Hoodmonger costume destroyed, André reverted to being a Black Lum, and revealed his plans to corrupt the Heart of the World itself, converting its energy into an army of Hoodlums. He then flew off in the direction of the Heart's chamber. Rayman and Murfy pursued him so that they might prevent this calamity from occurring. Once André was in sight of the door leading to the Heart of the World, he rushed for it, and accidentally flew straight into Globox's mouth and was swallowed.

At the Heart of the World, the Grand Minimus, King of the Teensies, told Rayman to take Globox to Clearleaf Forest, where they would find the Teensie Doctor Otto Psi. Otto was an old friend of the Grand Minimus, and hopefully he would be able to remove the swallowed André from Globox's stomach. As they travelled there, André become addicted to plum juice, forcing Globox (who was allergic to it) to get drunk on it. Eventually they arrived at the doctor's office. Despite Otto's bizarre musical attempt to remove the Black Lum, André simply moved to Globox's lungs. Otto then sent them to Doctor Roméo Patti, whose office was in the Land of the Livid Dead.

Roméo also tried a musical method, but André only moved to Globox's (particularly small) brain. Roméo then sent Rayman, Globox and André to the office of the third and final doctor, Gonzo, where the three Teensie Doctors combined forces and successfully removed André from Globox's stomach (it is revealed in Rayman: Hoodlums' Revenge that some of André's spirit still remained within Globox). However, André flew away and gathered up a small army of Black Lums. He then made an allegiance with the former Knaaren champion Reflux, who Rayman had defeated and humiliated on the way to Gonzo's office. Reflux wanted revenge on Rayman, and André was able to persuade him to steal the Sceptre of the Leptys from the Knaaren king, Gumsi. Once they had invoked the power of the Leptys (the Knaaren god), Reflux would be able to kill Rayman, and André would be able to spawn a greater army of Hoodlums (as he had attempted to do with the Heart of the World).

Later on, André and Reflux make their way to the top of the Tower of the Leptys. Once there, Reflux uses the Sceptre to summon the power of the Leptys, which transforms him into a more powerful monster than he already was. As Rayman and Globox climb the Tower to confront the villains, Globox reveals that he has grown fond of André and wants to be reunited with him. At the top, Reflux fights Rayman. As the battle goes on, Reflux embeds the Sceptre in his back so that he can utilise its power more fully. He grows massive and sprouts wings. André, who is now inside Reflux's back, uses the Sceptre of the Leptys to reproduce and create more Black Lums; these Black Lums shoot from the flesh of Reflux's back, transform instantly into Hoodmongers and then walk back into Reflux, who reabsorbs them. Rayman, with the added help of Globox and his Armaguiddon machine, defeat the monstrous Reflux by shooting at him and killing his Hoodmongers. Reflux turns to ice, shatters and vanishes, though it is unclear if he is dead.

With the grimace ability he was given by Gumsi as a reward for defeating Reflux earlier, Rayman transforms André back into a Red Lum. All Black Lums subservient to André also revert to their original forms, thereby ending the Hoodlums' havoc. The apparent explosion of the Leptys sends Rayman and Globox flying through the air, and they land in the very spot where they had been sleeping at the beginning of the game (it seems that the events of the entire game took place over the course of a single day). Globox says that he misses André and asks Rayman to scare a Red Lum, thus bringing André back. Rayman declines, wondering aloud what could possibly frighten a Lum as he falls asleep. A flashback then reveals to the player that it was Rayman's mischievous, wayward hands that had frightened a Red Lum into André the previous night.

André makes a small appearance in this game, though he is not named. At the beginning of the game, Rayman is berating Globox for accidentally swallowing a Dark Lum while attempting to save the Teensies. Globox suddenly flees. When Admiral Razorbeard hears that Globox has swallowed a Dark Lum, he decides he wants to capture Globox so that he can take advantage of its power, and use it to conquer the Glade of Dreams and get revenge on Rayman (this game apparently takes place between the events of Rayman 2 and Rayman 3, though its canonicity is uncertain). It is unclear how exactly Razorbeard plans to use André, but it is most likely that he plans to devour him; Robo-Pirates are known to gain energy by eating Red Lums, and Razorbeard is shown eating a Yellow Lum at one point in Rayman 2. At the end of the game, once Rayman defeats Razorbeard and his Grolgoth in the Heart of the Ancients, Rayman manages to track down Globox. Globox spits out the Dark Lum and returns to his children.

Even though André has been extracted from Globox's stomach, some of his evil spirit still remains. In Rayman: Hoodlums' Revenge, the fragment of his spirit reawakens and musters the Hoodlum army once more, in another attempt to conquer the Glade of Dreams. The piece of André's spirit slowly takes possession of Globox's body as Rayman and Globox fight back against the Hoodlum army. When Rayman defeats the Firemonster, André takes full control over Globox and announces to his return to Rayman. André then transforms Globox into a clone of Reflux. When Rayman defeats the clone, Globox reverts to his normal self and André's spirit fled.