Shadow Ray is a playable character in Rayman Adventures and Rayman Mini.

Shadow Ray is a doppelgänger of Rayman, whose origin is unknown. Physically, he is identical to Dark Rayman, an evil clone of Rayman who appears in Rayman Legends. Unlike Dark Rayman, Shadow Ray isn't a mindless clone who mimics Rayman's actions or causes instant death upon impact. It is unclear if the two characters are linked in some way. He is a being in the flesh, with a mind and a will. Even in his description, it says that Shadow Ray is an avid movie lover who admires cinematography.

The biggest movie fan of the Glade of Dreams. He went as far as to remove any color from himself as a tribute to those old silent movies. Everybody in the Glade thinks he's an artist.
—In-game description, Rayman Adventures

He appears in Rayman Adventures, where can be bought in the All-in-One pack. He could previously be purchased for gems. 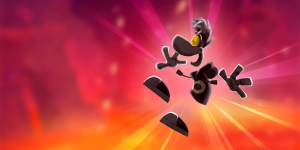 In Rayman Mini he is unlocked for 33 electoons.