Castle in the Clouds

Castle in the Clouds is the fourth level of Toad Story, the second world in Rayman Legends. In this level, the team of heroes must glide through the windy currents, and avoid certain landscapes that can crush them.

This level is one big area. The heroes start out by gliding from air current to air current. The first secret area is behind a fake wall near the starting point. As the team goes along, they will notice that many of the platforms are floating in the air. The first Skull Coin is underneath a Darkroot. After being sent to the background by the champibumper, the team must now avoid getting crushed by several platforms. The second Skull Coin is on a small platform that collides with a larger platform. The second secret area can be found by going to the top between two crushing platforms and then by going to the right. After a little while, the team will jump on another champibumper. Now the heroes must escape from the incoming Darkroots, by gliding and jumping on the Toads' parachutes. Once they finally get away by performing walljumps, the ending point of the level is close by.

The players must jump from Toad to Toad and glide on the currents to reach the cage. 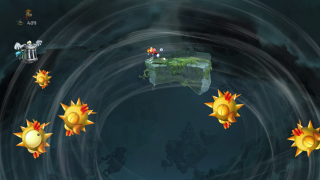 The heroes must reach the flying Teensie cage in the air by avoiding the moving spiky birds.

This level is invaded by enemies from Teensies In Trouble, including Lividstones. They can be stationing in a pre-defined place, being parachuted or using stilts.

The level is the beginning of the normal level reversed, and starts where the first blue champibumper spring (which leads the player(s) to the background in the original level).

Contrary to the normal level, there's no windy sections anymore, the player(s) must bounce on the parachuting Lividstones in order to proceed. In the meantime, the stone blocks from the original level are collapsing as long as the player(s) get far in the level.