Livingstones, also known as Lividstones or Explorators, are recurring enemies in the Rayman series. They made their first appearance in the original Rayman game, and later appeared in Rayman Junior, Rayman Designer, the Game Boy Advance version of Rayman Raving Rabbids, Rayman Origins, Rayman Jungle Run, Rayman Legends and Rayman Adventures. Before Rayman Origins, they were a limbless species with tall slender bodies, large noses and moustaches.

Livingstones are common enemies who only appear in levels of the Dream Forest. They are averagely-resistant enemies who freely wander on their platform, turning backwards when they face an obstacle. Rayman must simply avoid contact with them. If not eliminated in one hit, they go crazy and charge toward him until he punches them again or they fall in water. In the Atari Jaguar version, however, they will run toward him regardless of what he does.

Besides Rayman's fist, another way of defeating them is for him to use his grimace, which frightens them and makes them run away from instead of towards him and eventually fall into water. Rayman can also punch a plum onto their heads causing them to become dizzy but continue walking as usual, allowing him to jump onto the plum and use them as a walking platform to reach higher places or finish them off normally.

Another variety of Livingstones are little Livingstones which, as their name implies, are shorter than standard Livingstones, but they are also more aggressive in their attempts to hurt Rayman and are more adept at dodging blows from his telescopic fist.

In Rayman Designer, the Livingstones appear as enemy events in the Jungle world. There are three types of them available.

The standard variant of Livingstones appear in the Game Boy Color version of Rayman, in the worlds Spellbound Forest, Rainy Forest and Ancient Forest. They behave exactly the same way as their original counterparts, except they do not charge if not defeated in one shot, and instead continue their patrol until they are beaten. 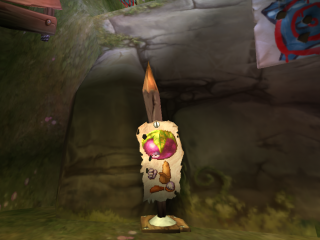 The plum-posts in Rayman 3 bear images of Livingstones, in reference to their role in the original Rayman game.

Livingstones do not make a physical appearance in Rayman 3; however, Rayman must occasionally throw a plum onto a post to create a platform in order to progress. These posts bear images of Livingstones, in reference to the role they played in the original game. 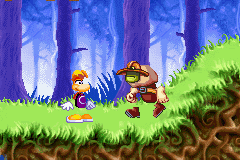 A Livingstone, as seen in the Game Boy Advance version of Rayman Raving Rabbids.

Livingstones also appear in the Forest world of the Game Boy Advance version of Rayman Raving Rabbids. Here they are known by the name of Explorators and have a significantly altered appearance. They no longer have noses or moustaches however they have visible mouths, they wear a belt around their pants, their gloves are a different color, and their shoes have a more defined look. They also carry around sacks and can use their hats as a weapon. They can still be defeated by being punched however.

They may look (and SMELL) awful, but are surprisingly easy to defeat. Ugh, THIS guy! Seriously, he STINKS. This hygenically challenged villain reports to the Hunters and roams the land, imprisoning sweet, little Electoons. While the Lividstones are undeniably vile creatures, they're actually pretty pathetic and can be quickly defeated with a quick slap, punch, kick or dodge.
—Official site, Rayman Origins

Livingstones return as enemies in Rayman Origins, but here they are renamed Lividstones, perhaps to suggest a connection with the Livid Dead. Like most of the returning characters from the original Rayman, they have been redesigned, and now have limbs (rendering Rayman himself almost unique), visible mouths, longer and more crooked noses, and more scraggy body structures. Their appearance is also more zombie-like. Like most enemies in the game, they have only one resistance point, and can be defeated and bubblized easily. They can no longer be driven crazy by punching or grimacing at them. Their way of offense is to either headbutt Rayman or wave their hands in a cowardly manner. They are revealed to enjoy bullying Lums, poking their faces, playing basketball with their bodies and using their heads as deodorant. They are also revealed to be the lackeys of the hunters. The smaller variant of Lividstones are not present in this game, but there are different kinds of Lividstones, some of them holding bamboo sticks to attack the characters, and others with spikes on their hats to hurt anyone who attempts to crush them.

Lividstones return as enemies in Rayman Legends. However, they are no longer explorers, but a gang of bandits who break into the houses of the helpless Green Teensies who inhabit the area. In this game, they wear blue hats with a red feather, a small sleeveless brown unbuttoned shirt, brown wristbands, and a pair of patched blue pants held by a rope. A second version appears in Castle Rock. These Lividstones are similar to the first Lividstones, but they wear a red bandanna on their heads, and their pants are black as opposed to blue. Their main weapons are planks with pointy nails, and their parachutes allow them to ambush. In the Wii U, PlayStation Vita and Nintendo Switch versions, Murfy can interact with them by cutting their parachutes, and stun them to let the other players attack them; Murfy can also grab them and move them wherever he wants. The second kind of Lividstones appear on top of stacked Lividstones, where they sing as opposed to attacking, and are easily destroyed. Normal green Lividstones also appear in the game but only in the Back to Origins levels. 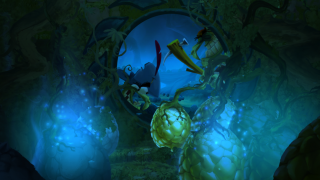 The Lividstones who find the Ancient Eggs.

Lividstones return again in Rayman Adventures. Like almost everything in the game, their designs are the exact same from Rayman Legends. As a change, they are the ones who set off the events in the game. Two Lividstones happen to come across the Sacred Tree and get into the roots of it. They steal all the Ancient Eggs within, resulting in the Sacred Tree wilting. They then flee in their flying ships with all of the eggs. One egg happens to fall from the ship and land on either Rayman or Barbara. Lividstones can be found in Medieval Mayhem and Toad Story. They occupy areas such as the castle grounds, enchanted forests, dark dungeons, and haunted matters. Their attacks are almost all the same, being their weapons are still nailed planks and parachute from above. The second kind of Lividstones also return, but their behavior is still them standing on top of stacked Lividstones and singing. Though speculated, there is one new ability they have learned which is that they can dodge being hit by a knocked back Lividstone. If the player happens to hit the first Lividstone of a chain that jump into the foreground too early, the other Lividstones will jump and avoid being hit by the knocked back Lividstone. But this move is completely rare and doesn't occur often as they only do it in one specific level, thus leading it to be speculated as a glitch or mere coincidence.

Lividstones that have their Rayman Origins design also return in some levels.