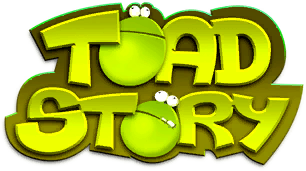 The logo for Toad Story.

Toad Story is the second world in Rayman Legends and the third world in Rayman Adventures. The world features a swamp/beanstalk motif based on the classic story of Jack and the Beanstalk, and wind-based puzzles feature predominantly. Later levels take place entirely in the sky on floating islands.

Toad Story is full of beanstalk platforms all around, the main landscape of the world. Murky waters are below, but are usually safe to swim in. In several areas it is very windy; many air currents that the players can fly with. Grassy platforms sometimes will collide against themselves, some even collapse on their own. Scattered in the world are large, uneven shaped castles in the background. Parts of the world are either cloudy, sunny, or dark. Darkroots can grow from anywhere and at any length.

After defeating the first Dark Teensy in Teensies In Trouble, Rayman and his team of heroes enter in Toad Story. In this place filled with curving beanstalks all around, they will find that hostile Toads reside with melee weapons. Not only are there wind currents common in this world, there are one-eyed creatures that can be poked by Murfy to blow wind. Darkroots are common in this world, and can be seen often as the team progress.

The heroes will eventually encounter the second Dark Teensy in Altitude Quickness. Just like the first one, he escapes in his mechanical vehicle. As the heroes continue their search, they will come across Gandalf who gives them the very useful Blue Punch power-up. The power is mostly used in certain levels where the team is gliding with the wind currents.

When the team catches up to the Dark Teensy, he whistles for an Armored Toad to defeat the heroes. The Armored Toad ends up being defeated, and collides against a frequently seen large castle in the background. The players end up using a charged Blue Punch to send the Dark Teensy to the same fate as the first one.

The final level, Orchestral Chaos, takes place again in the forest like beanstalk area. This is one of only two music levels in Rayman Legends to have an original composition and not a cover.

What surprises rest atop the towering beanstalk?
—The Captain, Rayman Adventures

Toad Story is the third world in Rayman Adventures. It is unlocked once the Sacred Tree grows to at least 290 meters high.

The Big Beanstalk, also known as Toadstory Beanstalk, levels take place high up in the beanstalks.

The Ancient Temple, also known as Toadstory Avatar, levels has the player explore ancient temples. Most of these levels have some sort of trap which can, or has to, be set off.

Castle in the Clouds

In the Castle in the Clouds theme it is shown how the toads from Toad Story are at war against the Livingstones from Medieval Mayhem.

The Murky Swamp levels take place in a swamp area.