A temporary upgrade of the helicopter is also available: it is called the super helicopter. It allows him to fly in the air with his hair, which happens three times in the game: in Mr Stone's Peaks, when he is given the potion by the Musician, in Eraser Plains where the potion can be acquired by touching a group of stars and in Pencil Pentathlon, where he finds another potion. In the Game Boy Color version of Rayman, Rayman also obtains the super helicopter ability by eating a specific kind of a plant.

Even though Rayman loses most of his powers at the beginning of Rayman 2, his helicopter remains, being as useful as ever. When he goes beneath the Sanctuary of Rock and Lava, Ly the Fairy appears before him and gives him a Silver Lum, which upgrades his helicopter to the super helicopter again. Unfortunately, at the end of the level, he loses this upgrade to Foutch, who thumps him. In Rayman Revolution, this was partially restored, meaning that he could permanently fly only over pools of lava, and also during the battle against Grolem 13. 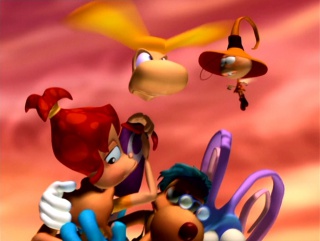 Rayman using his helicopter power to save his friends.

By the end of the second episode, No Parking, Rayman uses the helicopter to save his friends from falling into a precipice. Questioned by Cookie about what was he doing, Rayman replies it was a small trick he learnt. 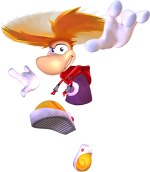 The helicopter in Rayman 3. 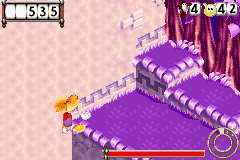 In Rayman: Hoodlums' Revenge, Rayman can use the helicopter since the beginning while stating that "he has been able to use his helicopter power his whole life", which can be possibility a reference to the events from the original Rayman. The Throttle Copter combat fatigue explores again the super helicopter ability, although this time it used Blue Lums to stay airborne once activated. 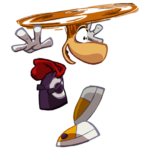 In Rayman Origins, Rayman, Globox and the Teensies receive the power to glide after rescuing Holly Luya from the mouth of a Darktoon. The helicopter allows the characters to glide over obstacles, and can lift them if they use the ability in an air current.

In the PlayStation Vita version of Rayman Origins, the player can collect relics to unlock two mosaics showing stories from the pasts of Rayman and Globox. The Rayman mosaic reveals the ultimate origin of Rayman's helicopter hair. It seems that Rayman was originally bald, and had a girlfriend or wife who was a member of his own limbless species. One night, as they slept together in a forest, an army of tiny blonde hair creatures crept up on Rayman, and parasitically attached themselves to his head. Frightened by this strange event, Rayman's female companion took out an oversized pair of scissors and tried to cut Rayman's hair. Rayman panicked and ran off the edge of a cliff, only to discover that his new hair had the ability to act as a helicopter, flying him to safety.