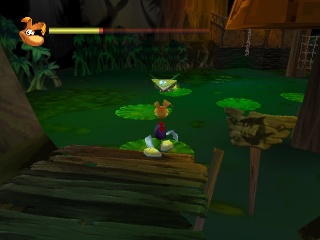 Rayman frees a greenbottle in the PlayStation version of Rayman 2.

Greenbottles are green, grinning, flying insects encountered in the PlayStation version of Rayman 2, where, along with the Denys and the Ludivs, Rayman must free them from the cages in which the Robo-Pirates have imprisoned them. Despite their frog-or fairy-like appearance, the greenbottles are actually flies. They wear a permanent grin on their faces (as seen in most Rayman games except for Rayman 3) and all have a high-pitched voice.

Notably, Murfy, a character who acts as Rayman's coach in several Rayman games and can be controlled in Rayman Legends, is a greenbottle, as revealed in the manual for Rayman 3. In all versions of Rayman 2 except for the PlayStation version, Murfy guides Rayman through the game's controls and gives him a few hints. In versions of the game without full voice acting, Murfy whispers to Rayman, but in the PlayStation 2 version, he has a high-pitched voice. In Rayman 3, his personality was further developed and he became an ironic, sarcastic guide for Rayman while traversing the Fairy Council, constantly poking fun at his user manual and breaking the fourth wall.

Aside from the PlayStation version of Rayman 2, Murfy is the only greenbottle that is ever seen. However, in that game they are not referred to as greenbottles but as Murfies.