A Ludiv is a type of fairy found in Rayman's world, they serve a variety of purposes, but their role in the respective plots of the games they feature in is minor. A character named Flips who bears a strong resemblance to the Ludivs, features in Rayman: The Animated Series. However, it is never confirmed whether or not she is one. 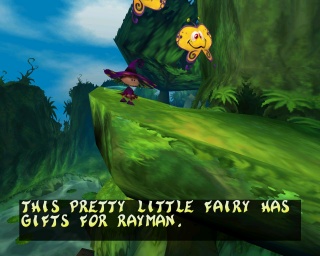 A Ludiv in the bonus stage of Rayman 2.

A Ludiv (referred to only as a "pretty little fairy") appears in the bonus stages unlocked at the end of each level in Rayman 2 by finding all the level's Yellow Lums and breaking all its cages. In these bonus stages, the player controls a baby Globox, which must race against the Spyglass Pirate to get to the Ludiv first. If the player wins the race, the Ludiv can grant Rayman gifts (health and/or Power Fists). In the PlayStation version of the game, Ludivs are imprisoned in cages by the Robo-Pirates, along with greenbottles and Denys. When Rayman frees Ludivs, hearts appear over their heads in a manner which recalls the Electoons from the previous game. 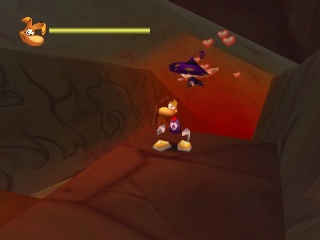 A Ludiv after Rayman has freed her from her cage in the PlayStation version of Rayman 2.

The most notable appearance of the Ludiv is in the PlayStation version, where Rayman must free them from cages, along with Denys and greenbottles. The manual for this version of the game states that it is said that Ludivs are short-sighted and that they wear glasses. Without them, they'd end up stuck, lost and knocked to the ground.

In Rayman 3, Ludivs guard the Heart of the World in the Fairy Council.