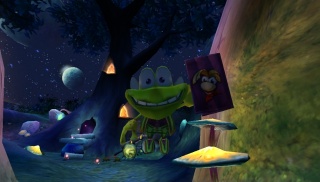 Murfy with the Manual, as seen in the Fairy Council.

The Manual is an item which appears in Rayman 3 and provides Rayman with information he needs to get through the game. It is a purple booklet with an image of Rayman's face on the front cover; this image depicts Rayman as he appeared in the original Rayman game.

The Manual makes its first appearance at the beginning of the second phase of the Fairy Council, the first of nine levels in Rayman 3. It is in the possession of Rayman's coach, the greenbottle Murfy, who reads out general information the Manual has on the game's basics. Murfy notices that most of the Manual's advice is extremely obvious (e.g. ‘Push the jump button to jump.’), and makes sarcastic remarks about some of its advice (e.g. ‘Someone gets paid to write this junk?’).