Holly is a playable character who appears in Rayman Adventures and Rayman Mini. She is a girl who loves the holidays but can't stand Christmas carols so much that it gets to the point of her getting aggressive to those singing them.

Holly is dressed in a costume similar to a Christmas Elf. She wears a red and green elf hat that have jingle bells on each tip with a big bell on the very top. A fluffy angel wing is attached to each side of the hat. Her hair is long and curly, not unlike Barbara, and is as white as snow. She wears a red long sleeved, short dress with green cuffs and has a white puffball on the chest area. She wears a black belt with a golden buckle around her dress. Underneath, she wears green shorts and red & green striped stockings. Her red boots are tipped with white fur and have a jingle bell attached to each one. Her weapon is made of a candy cane for the handle and has a Christmas Wreath at the end.

Holly is crazy about the holidays, but can't stand Christmas carols. Don't even think about singing songs of holiday cheer around her unless you want to get decked in the halls.
—In-game description, Rayman Adventures

In Rayman Adventures she is only available through the Christmas Pack that also includes Ray-mas, purchased through the shop. This pack only appears during Christmas. 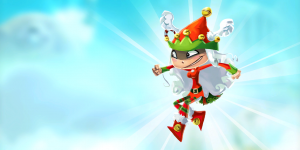 In Rayman Mini he is unlocked for 30 Swag Coins.