Hellen is a character who appears in Rayman Adventures. She was introduced alongside Raydoom in the Hell-O-Wheel event. Hellen is a demonic warrior who has risen up from Hades to celebrate her favorite holiday, Halloween.

Hellen is a gray skinned demonic being with fiery hair. She has fiery, glowing eyes and unlike any other princess, Hellen has a set of fangs instead of teeth. She wears a long charcoal black, tattered dress. She dons a black, metallic helmet that leaves a third of her face covered in shadow with only her glowing eyes being the sole feature the player can see. The helmet has two dark red lines going down on each side. Her helmet wings are skeletal wings. She is decorated with skulls everywhere on her outfit. Her black wristbands, boots, and belt all have at least one skull on them. Her weapon of choice is a scythe that is made up of bones and skulls which is wrapped up at the handle with black taped.

The fiercest warrior that ever roamed the underworld, Hellen is here to celebrate her favorite festival, Halloween! Despite her ruthless reputation, Hellen is actually very friendly, and rarely has any bones to pick with anyone!
—In-game description, Rayman Adventures 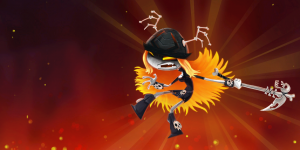