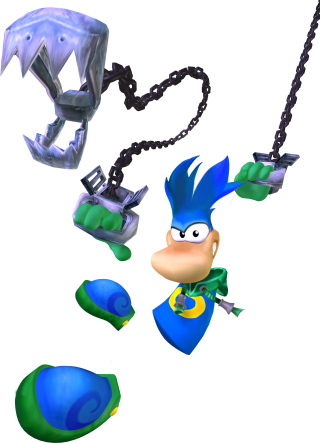 This power equips Rayman’s fists with metal jaws. You can use them to cling on to metal grabs. In combat, they cling on to the enemy. When this happens, press Space Bar or Left Mouse Button to give the enemy electric shocks.
—Manual (PC version), Rayman 3

The LockJaw is one of the five temporary powers used on several occasions by Rayman in Rayman 3. It allows Rayman to grab onto flying hooks to reach inaccessible places, and to electrify his enemies. 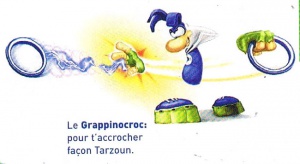 The early design of the LockJaw combat fatigue.

First acquired mid-way through the second level of Clearleaf Forest, the LockJaw is provided by the blue Laser-Washing Powder and allows Rayman to protrude a pair of bear trap-like devices from metal handles attached to his hands. This gives him the ability to grab onto flying hooks, which serve the same purpose as flying rings from the original Rayman game and Purple Lums from Rayman 2. 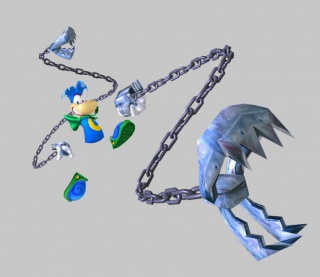 Offensively, the LockJaw can also inflict damage on several types of Hoodlums by having its metal jaws latch onto them and then further attacking them with electric shocks, allowing for a lengthy, long distance attack. However, the LockJaw is not able to latch onto all enemies, such as the Lavomatrixes, in which case it behaves like Rayman's typical telescopic fist. Most notably, the power-up is essential during the first phase of the final Reflux battle, as the constant stream of electric shocks that Rayman is able to deliver via the LockJaw is required to destroy Reflux's shield in order to allow Rayman to attack. It lasts 49 seconds, making it the longest lasting power.