The Hoodlums have created a laser washing powder that can transform their clothing into battle dress. It also acts on Rayman, giving him Superpowers. When a Hoodlum has a $ symbol above him, this means that he’s carrying a box of washing powder. Eliminate him to get hold of the box. But beware: the effect of the Superpowers is limited. So keep an eye on the gauge at the bottom of the screen to see how much time you’ve got left. To pick up the Superpower, all you have to do is move over the box.
—Manual, Rayman 3 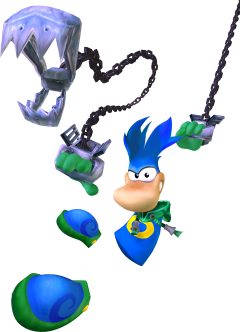 Rayman in his LockJaw form.

The Laser-Washing Powders (also known as Laser Detergent SuperPowers) are temporary power ups in Rayman 3 that were originally developed by the Hoodlums to change their clothes into combat fatigues. They are first found by Rayman and Murfy when a defeated Hoodmonger leaves a can behind in the Fairy Council, who then discover that the can works on Rayman himself. Only the Hoodlums that have a dollar ($) symbol above them carry a can that will be available once they are defeated. There are five different types of Laser-Washing Powders, each represented by a different colour, and lasting from 3 seconds for the Throttle Copter and 49 seconds for the LockJaw. When in effect, they double the points the player scores.