Mariachis, also known as Mexican Skeletons, are the main enemies of the Fiesta de los Muertos, the third world of Rayman Legends. They also appear in some Invasion levels.

Mariachis resemble the typical human skeleton, though with cartoon proportions, and are Mexican-inspired in their appearance. They come in many different colors, such as green, purple, and pink. They typically wear small hats, and have small, curly mustaches. They carry small guitars, and try to hurt the Heroes with them.

They are not a huge threat to Rayman and friends, and actually appear to be citizens of the Fiesta de los Muertos. They appear to enjoy arena fights, as they capture Rayman and his friends and put them in an arena to fight El Luchador. 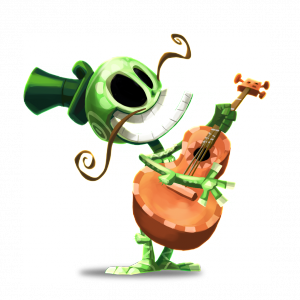 A mariachi
Retrieved from "https://raymanpc.com/wiki/script-en/index.php?title=Mariachi&oldid=76326"
Category: