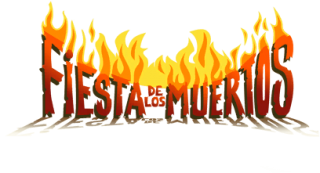 The Fiesta de los Muertos (Spanish for Feast of the Dead) is the third world of paintings in Rayman Legends. The real-world influence for this world comes from traditional Spanish themes pertaining to the holiday El Dia de los Muertos (The Day of the Dead) and fiestas (parties), as well as Lucha Libre wrestling, as seen in the encounters with the Luchadores. Otherwise, the world features a food/dessert theme, similar to the Infernal Kitchens in Rayman Origins.

Interestingly, in the Spanish version of the game, Living Dead Party is known as "Fiesta de los No-Tan-Muertos", which means "Feast of the not-so-Dead", thus making a direct reference to this world.

Fiesta de los Muertos is a more vivid-looking food world compared to the Infernal Kitchens in Rayman Origins. Most areas are filled with large and small cakes that act as barricades. Including the cakes, there are different pieces of food scattered that act as platforms, ranging from tomatoes, to guacamole, to cheese and to sausages. Cooking utensils and other elements appear; some are be harmful to the heroes. The princess levels of this world are not based on the world's design, they are based on the Land of the Livid Dead.

After getting rid of the second Dark Teensy in Toad Story, Rayman and his team of heroes advance to Fiesta de los Muertos. Upon entry in What the Duck?, the third Dark Teensy appears and casts a spell on the heroes, turning them into ducks. Murfy gets called on to get them through the cakes and other barricades to return to their original form.

Back to original size, the team must use the elements of the world like platform-like pieces of food to get through the dangers like blades and knives. Funnels will help them reach tiny openings in certain foods. Enemies like Mariachis can be seen in bunches and stacked on one another. Spiky snakes mostly appear near the cakes, eating them as they move around in different directions.

After another encounter with the Dark Teensy and getting by the herd of spiky snakes, the heroes must escape from a large, brown Luchador in Lucha Libre Get Away. He can only be defeated by reaching the end of the level to where he drowns in lava. Then the team must battle another Luchador as the boss of the world, named El Luchador. Shortly, the third Dark Teensy can be punched to send him off to where the first two are.

Mariachi Madness, the final level of the world and third music level overall, takes place in a desert-like area full of spiky snakes, Mariachis and serpent flutes. The song is a parody of the original song "Eye of the Tiger" by Survivor.

A lot of levels in Rayman Fiesta Run take place in the Fiesta de los Muertos.