What the Duck? is the first level of Fiesta de los Muertos, the third world of Rayman Legends. Here, the third Dark Teensy uses a spell to turn the players into a duck.

This level is one big area. As soon as the level begins, the third Dark Teensy appears and turns the players into a duck, limiting their moves. Shortly, after defeating a few Mariachis, Murfy gets called upon to help eat blocking cakes. As the heroes continue while avoiding obstacles along the way, Murfy will continue to eat the cakes. The first secret area can be found by reaching a large skull with a bouncy brain. The first Skull Coin is near the bottom of the level, near some stacked plates. In certain spots, Murfy can't eat some of the cake, as sharpy platforms will block the players as ducks from advancing. The second Skull Coin is located inside a vertical cake. The second secret area is located behind some foreground cooking elements. Later on, the team will glide down, with Murfy still eating certain parts of now different cakes. The third Skull Coin is near a sharpy object and a semi-large cake. When the heroes reach the bottom, platforms and even stuff in the background begin to collapse. Once the heroes reach the ending point of the level, they return to their normal forms. 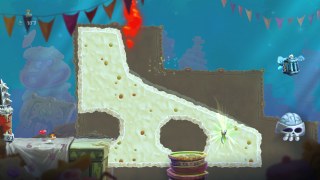 Murfy needs to eat the correct amount of cake so the heroes can dodge the fire and reach the Teensie cage.

As the players fly upwards, Murfy needs to eat some cake to allow the players to reach the cage.

This level is invaded by enemies from Teensies In Trouble, such as Lividstones, carnivorous liana‏‎s, fire ghosts, Franckys and Dark Rayman.

The level is a part of the original level: it starts from the end of the giant pit (where the music changes in the original level) and ends near the place where the Teensie king is located in this level. Compared to the normal level, this one is reversed. First of all, the player(s) uses carnivorous liana‏‎s to go through a climbing sequence. Fire ghosts clear a path through the cake, allowing the player(s) to continue, without touching them nevertheless. Once the top reached, the player(s) go straight ahead and must wait for the last fire ghost to create a path through cake to reach the finish line.

While proceeding, Dark Rayman is chasing the player(s) (the player in single-player or the player leading the group in multi-player).