Olympia is a playable character from Rayman Legends, Rayman Adventures and Rayman Mini. She is the princess of Olympus Maximus and is the ninth of ten princesses that Rayman and his friends must rescue.

Olympia is dressed in a white outfit consisting of a boobtube, a skirt with a blue belt, and open-toe boots, as well as golden armbands. She also has long green hair, and wears a winged, golden helmet resembling that of a Roman legionary. Her weapon of choice is a wide sword.

Born on mount Olympus, this little princess has been sent by the Gods to help Rayman save the world!
—In-game description, Rayman Legends, Rayman Adventures

In Rayman Legends she is unlocked once the level Up, Up and Get Away! in Olympus Maximus has been completed.

In Rayman Adventures she used to be available for purchase for 500 gems, but is now unlocked from the start. 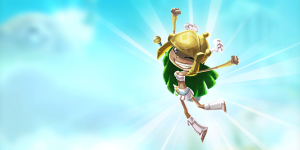 In Rayman Mini she is unlocked for 5 electoons.