Sibylla is a playable character from Rayman Legends, Rayman Adventures and Rayman Mini. She is the sister of Olympia, the princess of Olympus Maximus and is the last of ten princesses that Rayman and his friends must rescue. According to her description, she loves to hunt the Minotaur.

Sibylla and her sister Olympia are very alike, with some exceptions. The entirety of her skin is grey in color, and she has long, lilac hair. Her entire clothing is black, although her helmet is silver and the wings on it resemble that of bats' wings, which are black and plum colored.

Olympia's twin sister is a real Minotaur hunter. She hates these little guys and is determined to send them back to where they came from!
—In-game description, Rayman Legends, Rayman Adventures

In Rayman Legends she is unlocked once the level Up, Up and Escape! in Olympus Maximus has been completed.

In Rayman Adventures she can be purchased for 1 500 gems. 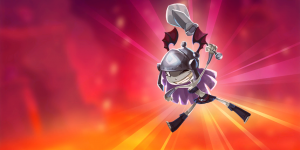 In Rayman Mini she is unlocked for 17 electoons.