Rigatoni is the main antagonist of Rayman: The Animated Series, and is a character that only appears in this. He is the ringmaster of a flying circus that he takes to various places of the Glade of Dreams, and along the way he orders his lackey, Admiral Razorbeard, to capture strange creatures as slaves for his circus. His most beloved circus freak is Lac-Mac, who is the star of his show, to the point where he seems to have some disturbing fascination with him.

He is an egotistical and greedy character, perhaps more so than Razorbeard, who treats his slaves very badly, and for fears that they will escape or get stolen, his circus has a large CCTV system which he uses to keep an eye on them. When Rayman sets himself and his friends free, Rigatoni instantly brands them all as criminals, and gets in contact with Inspector Grub to track them down in Aeropolis. He does not appear in any more episodes after the first episode, Lac-Mac Napping. He is voiced by Danny Mann. 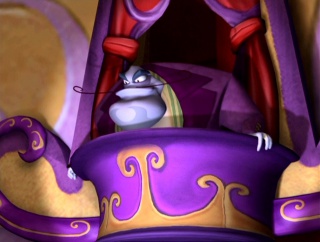