Rayman: The Animated Series was a computer-animated TV programme based on the Rayman video games series. It was produced in 1999 as an accompaniment to the release of Rayman 2 in the same year. Although it was planned to be a full 13-episode series that was meant to be aired on TV worldwide the following year, the series was cancelled and only four episodes were produced, presumably due to poor writing and lack of funds, despite being funded by the government of Quebec, Canada, and they were aired in very few countries in Europe, notably France, Germany (in which it was aired on Super RTL) and the Netherlands.

Rayman had already been captured by Admiral Razorbeard and is being held at Rigatoni's circus - a giant tent which floats from one location to another, where he is forced to do circus tricks. After being thrown in the dungeons, he soon meets four other prisoners, Betina, Cookie, Flips and Lac-Mac, who is the star of the circus show and therefore Rigatoni's favorite prisoner, and plans their escape. When they do escape, they end up on the run in the vast forest city of Aeropolis, where Inspector Grub is pursuing them under the orders of Rigatoni.

Most of the characters who appear in Rayman: The Animated Series are rough equivalents of characters from Rayman 2. 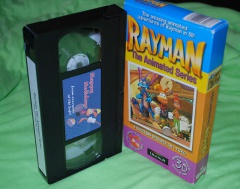 The VHS for Rayman: The Animated Series.

Although very rare, the Rayman: The Animated Series is available on VHS and DVD. An English VHS was released in the United States and Australia, a French one can be found in France and Belgium, and a German one was bundled alongside some copies of Rayman. A DVD is also available, but only in France. Though the text on the cover is in French, the English and German versions are included as well as the French version. Some French copies of Rayman 2: The Great Escape on PC also contain the series on the same disc. An Australian release of Rayman 2 also claims to include the series on the disc, but this is not the case.