Selena is a playable character from Rayman Legends, Rayman Adventures and Rayman Mini. She is the sister of Estelia, the princess in the Day of the Dead world of Fiesta de los Muertos and is the sixth of ten princesses that Rayman and his friends must rescue.

Selena and her sister Estelia are very alike, but with some exceptions. While her face is painted in the same style as her sister's - a skull - the rest of her skin is pale grey. She has straight, long purple-blue hair, wears a black dress with a purple belt, black boots with purple trimmings, and red arm and wrist bands. Her helmet is in the same style as her sister's, but it is dark steel grey, and the wings resemble that of bats' wings, which are black and purple.

Estelia's big sister embodies the dark side of Fiesta de los Muertos, which makes her an even scarier fighter than her sister.
—In-game description, Rayman Legends, Rayman Adventures

In Rayman Legends she is unlocked once the level Sprint for your Life in Fiesta de los Muertos has been completed. 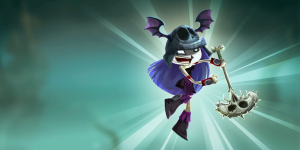 In Rayman Mini she is unlocked for 21 electoons.