Is it just a coincidence that Alesmansay is Pig Latin for 'Salesman'? Like the Grolgoth salesman perhaps? --iHeckler9

He grants Electoons and bonus levels for payment in Lums and Tings. I'm pretty sure that's what makes him a salesman. —Spiraldoor

Regarding the new image of the Magician that Spanex recently created – should we start removing the backgrounds from all character template pictures like this? I think the previous image with the Magician against the dark background and pink floor was better, but I figured it would be interesting to hear what everyone else has to say about it. Which style of picture is better for the templates – this or this? —Spiraldoor

Wouldn't the new kind of picture be considered as cropped? Also, MarioWiki does not seem to "cut" the background in their pictures so I would stay with the backgrounds. --

I'm not sure how the image was created; you'd have to ask Spanex. I suppose it's sort of a slippery slope when you start allowing people to construct semi-official images from sprite-sheets. —Spiraldoor

Well, the artworks made with droolie's templates aren't official at all, but we're trying to create them based on screenshots to make them look as exact as possible. However, I can't dare to create a "semi-official" artwork for the Magician without asking first, because he's a really important character, but at the same time requires an updated picture for the profile template. By the way, the cropped picture looks great, but I think the original is better.--Sergiomonty 17:26, 21 December 2011 (UTC)

Another thing is that Rayfan's been claiming that the picture of the Magician we've been using this whole time is stretched. Is this correct? He's always looked that way in my copies of the game. —Spiraldoor

The magician's nose makes it look like the whole picture is stretched, but it isn't, I've checked that before.--Sergiomonty 17:38, 21 December 2011 (UTC)

Well it looks like somebody changed it back to the original file. I personally like keeping backgrounds out. But if people don't want this then I'll stop.
P.S. I was about to submit a picture to Murray until I checked this page. It's still there, just not on the page. Spanex 20:25, 21 December 2011 (UTC)

The main reason we've been using custom images for Rayman Origins characters is that it's nearly impossible to get proper screenshots from the game itself. The Murray image you uploaded is fine for the article, as it's the best picture of him we can currently get our hands on. More high-quality, background-free pictures of Rayman Origins characters are welcome, but editing out the backgrounds of images already on the wiki doesn't really add anything. —Spiraldoor

Thanks Spiraldoor, I will keep this in mind. Meantime I should go tell this to the people over at the forum. You won't see any old image editing from me anymore. Spanex 20:41, 21 December 2011 (UTC)

The tombstone of the Magician?

Sometimes the Land of the Livid Dead, we can see mausoleums of ennemies from Rayman Origins. Notably for Stone Men, a Hunter and a Lividstone. At the beginning of the Land of the Livid Dead, in the background, we can see a tombstone with a hat engraved on it. This hat looks like the Magician's magic hat. Although his death at the end of Rayman Origins isn't confirmed (but she is very possible), like there are mausoleum of some of his dead soldiers in the Land, could it be his tombstone? Boomboleros7 20:16, 11 March 2012 (UTC)

Pics of each or it didn't happen. --iHeckler9

13:20, 13 March 2012 (CET)
I hadn't even noticed those tombs though; mentioning them in the corresponding articles would be great. —

New profile picture for the Magician 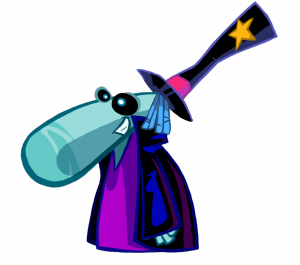 I spend my time reassembling pieces of artwork from the characters of Rayman Origins (thanks to Droolie) and put them on the wiki normally. However, this is the Magician, an important character, and I need everyone's agreement to put this picture on the Magician's profile like every other article. The profile picture we have now is too old, and we need something new; however, there's no artwork of the magician anywhere, there's only the picture with the Magician cosplaying as Mr Dark, but the design is too different and counts more like scrapped content. That's why I made this almost-exact replica, based on a screenshot I took from the Reveal. This doesn't mean that we're gonna forget about the old picture, there's enough space in the article for it. So, what do you think? I made most of the pieces of artwork for Rayman Origins articles, but I need thoughts here. Thanks --Sergiomonty 00:45, 29 April 2012 (CEST)

I think it should be changed. --iHeckler9

Seeing as this image is not of The Magician, but of the Dark Teensies, who've now gotten their own article, shall we revert to another image?

I just saw that two new cousins were added as relatives (Meiko and Kaito). From which games are they? --

I'm inclined to believe that it's some attempt at fanon or just vandalism, there's not been any other articles on them, and it's the only edit made by the user who added it in. I'm removing it for now, if it is added in again, some citation or proof would be needed.--

Yeah, that's what I guessed. But I wasn't sure since I haven't played any of the educational games where I know he appears. --