The Isle of Doors 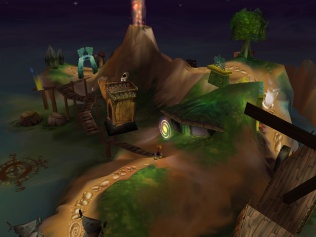 Rayman at the start of the Isle of Doors.

The Isle of Doors, also referred to as the Island of Doors, is an alternative to the Hall of Doors that only appears in the Sega Dreamcast, iOS and 3DS versions of Rayman 2.

It plays as a level-selection hub, and appears to be a small island in a strange, map-like sea, with a volcano in its centre, and Spiral Doors that take Rayman to the game's various levels. Next to each Spiral Door is a structure or other object which represents the corresponding world, such as a tree, an arch, or a Robo-Pirate warship. This is similar to the system used in the Hall of Doors, whereby an animated hologram of something representing a level will appear should Rayman walk up to that level's Spiral Door. If viewed from above, the Isle of Doors forms a remarkable likeness of the official map of the Glade of Dreams, complete with a compass rose and illustrations of Carmen the Whale and the Buccaneer.

When Rayman completes a level and returns to the Isle of Doors, he is thrown upwards out of the Isle's central volcano and lands beside the Spiral Door of the level he has just finished.