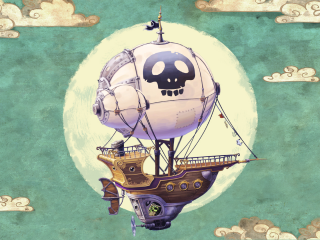 Artwork of a warship from Rayman Jungle Run.

Warships are vehicles that feature throughout the Rayman series. They are capable of flight and some appear to have gravity defying properties. They are part of the Robo-Pirate's fleet in Rayman 2, but are used by the Lividstones in Rayman Origins, Rayman Jungle Run, Rayman Legends and Rayman Adventures. 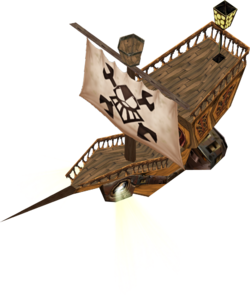 A warship in Rayman 2.

In Rayman 2, warships have brown wooden hulls, their decks have large masts topped by a watchtower. They have white sails decorated with the emblem of the Robo-Pirate army, painted black. At their bow is a long wooden stem. Their cockpit is situated at the stern and on its roof there are railings and a large lantern on a pole. There are searchlights on the stern and the bow, presumably used to survey areas for navigational and strategic purposes.

The warships appear during the opening cinematic to the game in all versions of Rayman 2. They are used to set the tone and demonstrate the state of the Glade of Dreams after the Robo-Pirate invasion.

When Admiral Razorbeard learns that Rayman, who had recently escaped from the Buccaneer, has arrived in the marshes of the Glade of Dreams, he ordered his right-hand, known as the Spyglass Pirate, to send warships to hunt down Rayman and prevent him from obtaining the Four Masks of Polokus. He later orders more to despatch and attack Rayman when he learns of his progress and recent acquisition of the second mask.

In the Dreamcast and 3DS exclusive Isle of Doors, a crashed warship can be seen near one of the miniature island's shores.

Warships are first encountered in the Bayou, who chase Rayman throughout the first section. At first, it sends helicopter bombs towards Rayman, but also later shoots cannonballs to destroy bridges in order to impede Rayman and potentially hurt him.

In the Canopy, a warship attacks Rayman early in the third phase. In the original game, it shoots cannonballs, and ends up crashing against the trunk of a giant tree, due to a probable fault in operation. In the PlayStation version of the game, the warship will attack Rayman for a set amount of time, before deploying a Green Henchman 800 and passing on. In Rayman Revolution, the warship flies over the area continuously, and Henchmen skydive from deck of the aircraft to attack Rayman. In order to progress, Rayman must damage the warship by firing his magic fist on its weak point on its stern. The vessel explodes when its energy bar is empty.

In Whale Bay, at the end of the underwater segment with Carmen, Rayman arrives at a large cove in which a wreck of a huge warship is situated. It is possible to board the ruins, browse the bridge and climb the pole with a rope net. A cage is located in the cab of the vessel.

At the end of the Echoing Caves, one can see a warship flying in the sky in the distance near the Spiral Door at the end, foreshadowing their role in the next level, the Precipice.

In the Precipice, a fleet of warships, at the command of the Spyglass Pirate, stalk Rayman throughout the entire world. They fire cannonballs at bridges and rope nets hanging from the walls of ravines, destroying them. They also fire red shells, which merely move in the same direction and can either be jumped over or shot at to be avoided. At the end, there are some warships docked near a pirate installation, who attack Rayman by firing cannonballs, who will be preoccupied in fighting a Ninja Henchman also, however, their cannonballs can also damage the Ninja Henchman, so Rayman can use them to his advantage.

Tomb of the Ancients

In the Tomb of the Ancients, a crashed warship is present. It contains a switch that needs to be activated to raise one of a set of platforms that Rayman needs in order to progress. A spider has adorned the ship with webbing that Rayman will need to climb to access the switch, however, this spider is hostile and will attack Rayman once he begins to climb.

In the final section of the Iron Mountains (split into the Pirate Mines in Rayman Revolution), Rayman meets Globox's wife Uglette, who is in tears in front of the entrance to a mine. She informs Rayman that the Robo-Pirates have taken all their children and forced them to work in the mines, despite Globox's efforts to stop them. Nearby is an unmanned warship, which Rayman will need to use to travel to all the mines and rescue the baby Globoxes. The mines are situated in between narrow canyons, making precise control a must to prevent damage to the warship, in addition, there are also dams which will attack the warship on sight, which will need to be destroyed by firing a cannon which appears to be positioned on the ships' crows' nest. There are four mines to visit, North, South, East and West, once all have been visited, the warship should be piloted back to Uglette, who will then be given the warship to leave the area with her rescued children.

A warship in the Game Boy Color version of Rayman 2.

In the Game Boy Color version, the warships appear in the opening cutscene and the Precipice. They are much smaller than those from the original Rayman 2 and have a different appearance. They do not move, and simply shoot cannonballs. Rayman can climb on the deck of these vessels to progress. 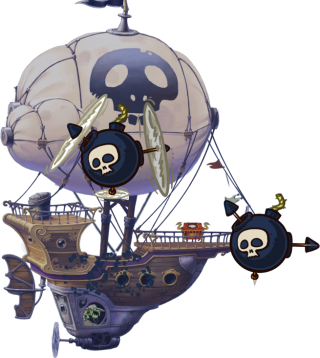 A warship in Rayman Origins.

Warships appear in Rayman Origins, but with more of a blimp-like appearance as opposed to ship-like. They now have a hot air balloon instead of a sail, a hatch on the roof of the cabin, a cockpit under the hull, visible guns and a rudder at the stern, like the Hoodlum airships from Rayman 3. They are used by Lividstones, who are seen operating the vehicle in the cockpit by pedalling to turn a propeller.

In Port 'O Panic and Pirate's Treasure! from the Sea of Serendipity, there are sections where a warship will stalk the heroes and attack by deploying helicopter bombs. In Port 'O Panic, a Darktoon holding Annetta Fish prisoner will jump on the warship during the heroes chase with it, while in Pirate's Treasure! the Tricky Treasure being pursued by the heroes will jump onto a warship, and remain there for the majority of the chase.

In Riding the Storm, a warship appears and attempts to prevent the heroes from reaching the Magician's base of operations in the Moody Clouds, much like before, they do so by deploying helicopter bombs.

At the final phase of the pursuit of the Magician, he will jump abroad a warship, crewed by three Lividstones, one piloting, and a hunter. The heroes give pursuit abroad mosquitoes, and once they have caught up, they will have to avoid missiles shot not only by the hunter, but from various silos located in the area. During this phase, the heroes can damage the warship by destroying its rudder, defeating the pilot Lividstone, and by defeating the hunter defending it. Regardless of the damage the heroes give, the warship eventually punctures an enclosure containing the heart of the Magician's base, which subsequently explodes and destroys this warship alongside the base. 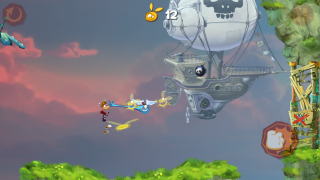 A warship, as seen in Rayman Jungle Run.

A warship appears in levels from the sixth world of Rayman Jungle Run, known as Pirate Ship. Its first appearance is at the end of The lost city, setting up its appearance in the next level; Boom! Boomm!. It makes another appearance in You again!. It behaves similarly to the warships encountered in the Sea of Serendipity from Rayman Origins.

The warship in Rayman Legends has the same appearance to that it had in Rayman Origins, barring a change of shading to reflect the revised art-style employed in the game. It appears in Gloo Gloo, the final level of 20,000 Lums Under the Sea, in addition to reappearing in levels from Rayman Origins located in the Back to Origins mode. 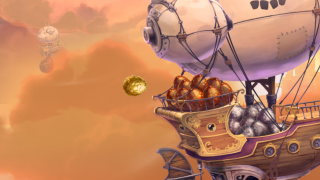 A warship in the intro of Rayman Adventures.

Several warships can be seen in the intro and are piloted by Lividstones who have stolen the ancient eggs sustaining the Sacred Tree.