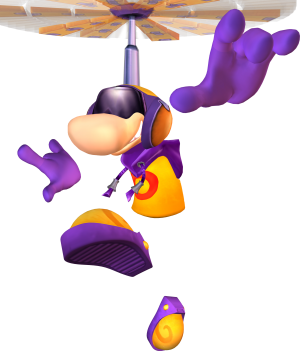 The Throttle Copter is a temporary power used on several occasions by Rayman in Rayman 3 and Rayman: Hoodlums' Revenge. 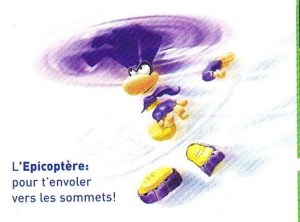 The early design of the Throttle Copter combat fatigue.

Rayman is now crowned with a fantastic helmet that’s about as snazzy as you can get. Activate your helicopter, and off you fly!
—Manual, Rayman 3

The Throttle Copter is provided by the yellow cans of Laser-Washing Powder, and it briefly allows Rayman to fly up into the air, similar to the super helicopter from the previous games. Its effect is the shortest in the game, lasting only 3 seconds, meaning it can only be used to help to gain some altitude; Rayman can reach distant places if he continues using his regular helicopter ability to glide once the effect wears off.

When Rayman acquires this power, the symbol of his chest turns orange, his torso turns yellow and his hood, gloves, and the base of his shoes turn purple. His hair and eyes can't be seen because he wears a yellow and purple helmet with earmuffs, goggles and a functional propeller on the top. Rayman finds this power for the first time behind a tree in front of Bégoniax's outhouse. 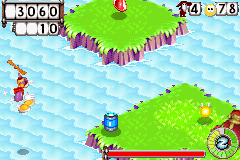 This power-up is also present in Rayman: Hoodlums' Revenge, in which it is provided by blue cans, where it gives Rayman the same costume and the same ability to fly. However, it can last until Rayman stops collecting Blue Lums.