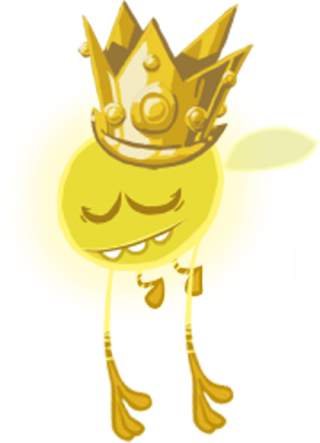 A Lum King, as seen in Rayman Origins.

In Rayman Origins, they can be seen flying and sleeping like normal Lums, but unlike them, Lum Kings are usually seen moving their arms rhythmically. When awakened, Lum Kings add 5 regular Lums to the score of the player who took them. They also play a dance, in which all of the Lums in the area start dancing and singing, and turn red for a short period. These red Lums award the player double to what they normally do. When the song ends, the Lums turn yellow again, and go back to their sleep. The song will always end if the player goes through a Darkblocker. Sometimes, Lum Kings are caught in bubbles, which are hidden in small areas that the player must find in order to turn all of the Lums red. Lum Kings are usually found next to big groups of regular Lums that sometimes also have to be found in hidden bubbles. It is unknown if Lum Kings really rule over the regular Lums and have their kingdoms, as there is a big amount of Lum Kings in the Glade of Dreams, much like the Grand Minimus. 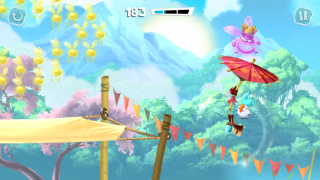 In Rayman Adventures, they appear and behave similarly to Rayman Origins, although here they appear purple and turn all other Lums purple rather than red.