Raymolk is one of the playable characters in Rayman Legends, Rayman Adventures and Rayman Mini.

Raymolk is similar to Rayman, except he is hairier in comparison. His skin is brown, he wears a brown toga, and his "hood" is actually the hide of a dead animal.

Deep, deep in the Glade of Dreams jungle lives this cool, yet hairy hero. His mind is on a different planet and his hobby is chasing big monsters for dinner.
—In-game description, Rayman Legends, Rayman Adventures

In Rayman Adventures he can be purchased for gems or bought in the Primal Cry Pack. 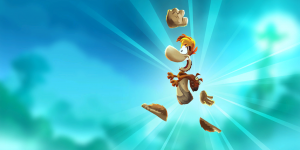 In Rayman Mini he is unlocked for 1 electoon.