Teensy Hermit is one of the playable characters in Rayman Legends, Rayman Adventures and Rayman Mini.

Teensy Hermit shares a similar look to the Grand Minimus, however, he wears prehistoric attire similar to Raymolk and Globolk.

This Teensy lives inside a cave on top of a high mountain. As you can guess, he doesn't see many folk up there... This may explain his strange outfit.
—In-game description, Rayman Legends, Rayman Adventures

In Rayman Adventures he is unlocked by purchasing the Primal Cry Pack. 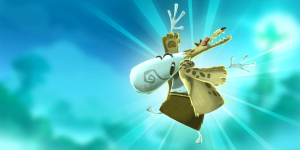 In Rayman Mini he is unlocked for 11 Swag Coins.