The Mysterious Inflatable Island is the first level of 20,000 Lums Under the Sea, the fourth world in Rayman Legends. This is where Rayman and his friends will swim in the sea while avoiding dangers like Dark Sentries.

Rayman and his team of friends start out on a toy inflatable island floating on the water. They will have to progress by going underwater and using their swimming ability. When they do so, they see the familiar large group of singing fishes. They sing the same tune as from the Sea of Serendipity in Rayman Origins. After going further into the now dark green-coloured sea, the team encounters a Dark Sentry that casts a dangerous light that will turn red and hurt them if they stay still on it for too long. The heroes will see these dangerous mechas more often as they continue to swim deeper and deeper into the sea. James Bond styled music plays during this section of the level. The first secret area can be found by going through a dark but fake foreground wall. Underwater Toads and underwater mines appear as the heroes advance. The first Skull Coin can be found by going through a tight but another fake, dark foreground. The second Skull Coin appears to the end of a different dark foreground. The third Skull Coin can be collected by avoiding a Dark Sentry casting a large light at the bottom of the sea ground. The second secret area is located well above the coin. The exit is nearby, pass a doorway that opens up.

The team must swim upwards while taking cover behind the long sea creatures to avoid touching the green lights cast by the Dark Sentries.

The heroes need to avoid sections of a Dark Sentry's large green light and underwater mines to reach the Teensie cage.

This level is invaded by enemies from 20,000 Lums Under the Sea. Actually, the entire level is under the water, and that could explain why it couldn't feature another enemy than the creatures from the current world. It features Underwater Toads and homing missiles. Dark Sentries don't appear here.

It is unlocked once the original level finished and if the player(s) gets far enough in the world 20,000 Lums under the Sea.

The level is the original one reversed: it goes from the entrance of the underwater base to the mysterious inflatable island where the original level begins. However, in order to complete it under 40 seconds, some paths disappeared and new ones were created. Currents and geysers are added in order to go faster. 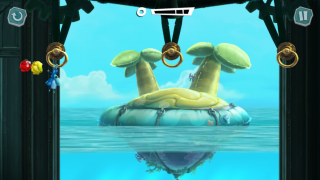 The inflatable island in Rayman Adventures.

In Rayman Adventures, the island can be seen from a distance in one of the levels of Sea of Serendipity.