Fish are aquatic creatures which appear in numerous games in the Rayman series.

Fish make their first appearance in the Dream Forest, the first world in the original Rayman game. Large piranhas leap out of the water and obstruct Rayman's path; these became one of the recurring elements of the series. Rayman can defeat a piranha by delivering a punch with his telescopic fist; this shatters the piranha's teeth and sends it tumbling back into the water.

Fish appear much more often in Rayman 2 than they did in the original Rayman game. In the Dreamcast and PlayStation 2 versions, the first time a fish is seen is when Rayman arrives in the Fairy Glade to search for Ly the Fairy. Several types of fish can be seen in the nearby ponds; these fish are passive, and some bear a slight resemblance to the large-eyed fish from the previous game. Later on in the same level, Rayman must cross a marsh filled with polluted water. Murfy telepathically advises Rayman not to swim in it via a nearby Stone of Thought. The marsh is infested with tiny piranhas. This piranha variety is found in many levels throughout the game; they devour Rayman should he fall into dangerous waters. Large piranhas like those in the original game first re-appear in the Fairy Glade as well. Notably, they attempt to eat Carmen the Whale's air bubbles in Whale Bay in order to soothe their heartburn.

In Rayman Revolution, a giant purple tentacle can be found while attempting to enter the Sanctuary of Stone and Fire without freeing Globox from the Canopy or Carmen from Whale Bay. Once Carmen is rescued, the tentacle no longer obstructs Rayman's passage.

The large piranhas return once more in Rayman 3, although these ones have mechanical jaws similar to bear-traps. At one point in the Clearleaf Forest, Rayman and Globox must ascend a rushing waterfall whilst being pursued by them. The same type of piranha is encountered again in the Bog of Murk, where they can be punched and defeated by Rayman.

Another type of fish is encountered in the underwater section of the Land of the Livid Dead. These fish swim passively about and do not react to Rayman's presence. Additionally, Céloche, the giant tripod boss of the world, releases a massive metallic fish at the start of the battle; it is this device that deploys the homing missiles that can defeat the boss. Similar metal fish can be found in the Summit Beyond the Clouds, specifically in the Looming Sea segment. These giant fish are attacking the boat Rayman and Globox are using to get to André's secret hideout. Once the summit comes into view, the fish stop attacking.

Two hostile varieties of fish return from the original game, those being the piranha and large-mouthed fish. They are identical in design but slightly different in behaviour. 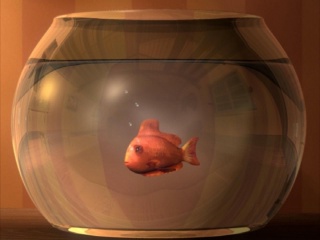 Rayman has a goldfish in a bowl inside his house as seen in the cinematics, but it does not share much interaction with Rayman or the Rabbids.

The only type of fish here are swordfish and they can only be found in supermarkets. Swordfish can be unlocked as a headgear for the Rabbids and also appear as XS Stuff.

Many types of fish can be seen in Rayman Origins, most of them being enemies from the Sea of Serendipity, such Blowfishes, spiky fishes and Redfishes. In the deeper areas, the luminous fishes and the Anglerfishes have the ability to illuminate the heroes' path and help him to avoid the dangerous attacks of the tentacle claws. Big groups of benevolent, colourful shoals of fish can be seen in certain areas; these harmless creatures don't damage the heroes, and will swim away from the player. Due to their bright colouration and large numbers, they may cover the screen and confuse the player. They can also camouflage groups of Redfish, Lums or even secret rooms with Electoon cages. Although the traditional piranha from the previous games was intended to make a return in Rayman Origins, it was scrapped before the release of the game. Instead, a smaller subspecies of piranha can be seen in Gourmand Land. 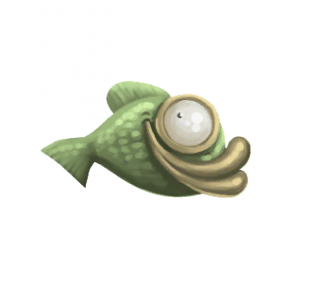 A fish seen in Rayman Legends.

In some worlds of Rayman Legends, especially the Fiesta de los Muertos, piles of fish bones can be seen in many levels, suggesting that many marine creatures were killed by Bubble Dreamer's nightmares during the century that preceded the awakening of Rayman and his friends.

Much like in some of the swamp infested waters of Rayman 2, fish bones can be seen piled up in various areas throughout the game, acting as static barriers that require breaking with an attack to progress.

Fish can also be seen in Toad Story as background decoration. However, in the Wii U version of the game, Murfy can attack them for bonus Lums. The same multicolor fishes from Rayman Origins can be seen throughout 20,000 Lums Under the Sea, where they can be seen in the background.