Twila is a playable character from Rayman Legends, Rayman Adventures and Rayman Mini. She is the sister of Aurora, the princess in the beanstalk world of Toad Story and is the fourth of ten princesses that Rayman and his friends must rescue.

Twila and her sister Aurora are very alike, but with some exceptions. Her skin is painted in grey and a pink-grey color, and has straight, bright red hair that is slightly longer than her sister's. She wears a navy blue dress that has a grid pattern all over, her boots and helmet are steel grey, and the wings on her helmet resemble that of bat's wings, which are black and purple. Her sword is also steel grey.

Aurora's sister hates the Toads as much as her sister! Growing up on a giant beanstalk turned her into an acrobatic warrior.
—In-game description, Rayman Legends, Rayman Adventures

In Rayman Legends she is unlocked once the level 6,000 Feet Under in Toad Story is completed. 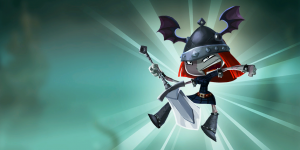 In Rayman Mini she is unlocked for 36 electoons.