Aurora is a playable character from Rayman Legends, Rayman Adventures and Rayman Mini. She is the princess in the beanstalk world of Toad Story and is the third of ten princesses that Rayman and his friends must rescue.

Much of Aurora's skin is painted in two shades of blue. She has chin-length, straight red-brown hair, wears a yellow ocher colored dress with a grid pattern all over, wears brown studded boots, and studded arm and wrist bands. Her helmet is similar to that of Barbara and Elysia's, only that it is brown, and the wings are more ruffled. Aurora's weapon of choice is a giant sword.

This warrior princess saw her kingdom being invaded by the nasty Toads, so she swore to kick them out of her kingdom!
—In-game description, Rayman Legends

In Rayman Legends she is unlocked by finishing the level 600 Feet Under in Toad Story.

This warrior princess saw her kingdom being invaded by the nasty Toads, so she swore to kick them out!
—In-game description, Rayman Adventures

In Rayman Adventures she can be purchased for 150 gems. 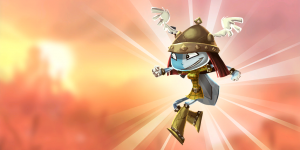 In Rayman Mini she is unlocked for 30 electoons.